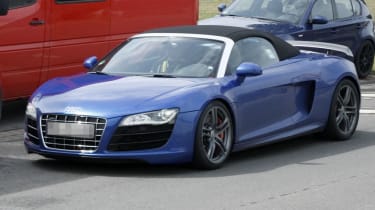 The Audi R8 Spyder is going hardcore. The convertible supercar has been spied in tougher V10-powered GT form, these shots showing it out testing.

We already love the R8 Spyder, in both V8 and V10 iterations. And the fitment of the R8 GT’s 552bhp 5.2-litre V10 engine isn’t likely to dampen our affection for one of the best convertibles on sale.

The only downside is likely to be the loss of the R8’s fantastic six-speed manual gearbox, as the R8 GT coupe only comes with Audi’s R Tronic automated manual transmission fitted. It does help that car to 60mph in just 3.6sec, though, and we’d expect the soft-top to hit the accelerative benchmark in under four seconds, too, before going on to a top speed just shy of 200mph. Proper supercar stuff. And with the roof off (or the R8 Spyder’s signature rear window wound down) its ten-cylinder soundtrack should sound pretty splendid, too.

The R8 GT’s other facet is weight-saving, and with the coupe version weighing 100kg less than its standard V10 equivalent (new seats, carbonfibre bonnet and lighter carpets contributing to the cuts) we can expect the R8 Spyder V10’s 1725kg total to drop, too.

Expect the Audi R8 GT Spyder at the Frankfurt motor show in the Autumn, and limited production and a pricetag in excess of £150,000 when sales begin afterwards.