Secondhand prices of Audi's V8 R8 have dropped, now the V10 model has arrived in the showrooms. Time to bag a bargain! 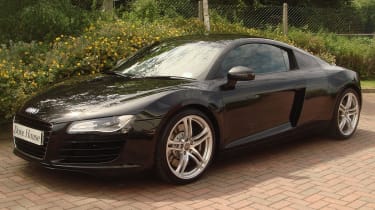 The arrival of the V10 R8 in Audi showrooms this month has led to a rash of V8 versions coming to market, resulting in the softening of second-hand prices. This particular example left the showroom for the first time in January 2008 and cost its original owner £83,520, but 18,000 miles later it can be yours for nearly £22,000 less.

It has most of the essential options, including satnav, magnetic ride and the B&O stereo upgrade, but it lacks electric seats (hardly essential) and the ‘blades’ on the side bodywork aren’t in a contrasting colour. The original owner used the car as his daily driver and had it serviced for the first time in February 2009, at a cost of £700. New rear tyres have been fitted at some point, but the fronts will need replacing soon.

The first thing that strikes you when you see an R8 up close is what a quality item it is. The 911 Turbo that this one is parked next to when we arrive is rendered almost invisible by the Audi’s striking looks.

It’s just as impressive when you drive it. As you’d expect, this car feels as good as new, and it’s nice to find that it has the manual gearbox, which is so much better than the semi-auto version. After stepping out of my RS6 the R8’s gearing seems remarkably low, but that’s only because its engine is so high-revving (the red line is at 8500rpm). The acceleration is impressively strong and is accompanied by a growly V8 soundtrack.

Overall, this R8 feels terrific. It’s a real alternative to the default 911 choice at this price point. It also reinforces my view that you don’t need 10 cylinders in the back of your R8 in order to have a great car