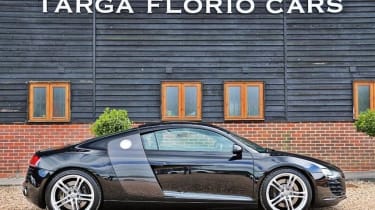 The Audi R8 is a remarkable performance car. It still has supercar presence despite being launched eight years ago. It’s a fast car even in its basic, V8-engined form. It has a sublime chassis, fluid over bumps yet agile and balanced.

And if you’re lucky enough to have bought one recently, you’ll be aware that it depreciates slower than just about any other car. If you look particularly hard, you can find early examples of Audi’s everyday supercar for under £50,000, but they’re hardly common.

Consider that R8s debuted costing little over £82,000, and even the cheapest models have lost little over 40 per cent of their value in eight years. Choose unwisely and a supermini can shed 40 per cent of its value in the space of twelve months – though admittedly, you could buy three whole superminis for the cost of an R8’s depreciation.

Even with a new R8 on the way, we don’t expect R8s to drop in value any more quickly than they have already. Which makes this 2008 car for sale with Targa Florio, via Classic and Performance Car, a tempting purchase.

Chichester-based Targa Florio has a wide range of R8s for sale, including a divisive chrome-wrapped example, but this particular car has a classic combination of Phantom black paintwork and a black leather interior. 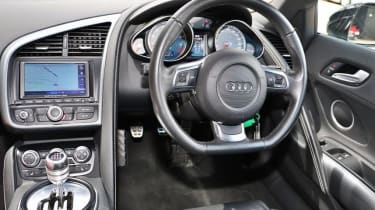 And it looks fantastic – even inside, where you’d expect such a usable car to be showing signs of age, the cabin seems little different from that of a new car.

Early V8s like this example also had the option of a six-speed ‘R Tronic’. As an automated manual it had neither the interaction of the proper manual nor the slick shifting of the modern dual-clutch S-tronic. Predictably, it was never as well-received as the manual, but as more supercars tread the paddleshift path the presence of three pedals and a stick makes the R8 quite appealing.

While you’ll pay more for an R8 than you might for a used 911 of the same vintage, the R8 can certainly hold its own against Porsche’s rear-engined alternative – and we can’t see R8s getting much cheaper.

> Find Audi R8s for sale on Classic and Performance Car