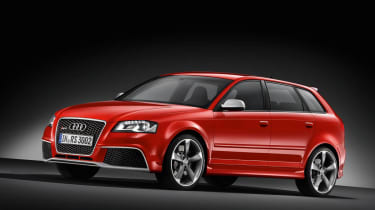 Audi is expanding its RS portfolio. Sharing showroom space with the RS5 and TT RS from next April will be the RS3. It has quite a lot in common with the hottest TT, too. Like its coupe cousin it uses the same 2.5-litre direct injection five cylinder and develops identical power figures: 335bhp and 332lb ft.

The RS3 is far from light, though. At 1575kg, it’s 125kg more than the TT RS, which is bound to dent performance a little – although a claimed 0-60mph (aided by the inevitable quattro 4wd system) of 4.6secs isn’t shabby. It will only be available with the S Tronic double clutch gearbox (our long term TT RS is a manual), but there will be a launch control system.

Elsewhere the front track width has been increased, the ride height has been dropped by 25mm from the standard A3 and it is surely one of the only cars to have wider front tyres than rear (235/35 ZR19 vs 225/35 ZR19). Hopefully this has been done to allow the RS3’s tail to be more playful. Titanium coloured 19in alloys are standard, but you will also be able to have them in black with a red rim strip.

The only other bit of interest about the RS3 is that it will only be available as a Sportback model – Audi-speak for five door. The reasoning goes that potential three door buyers would opt for the TT RS instead. UK ordering opens in December, with first deliveries of the £39,900 car from next April. It will inevitably do battle with the eagerly anticipated BMW 1-Series M Coupe, which we've driven recently and rate rather highly. The RS3 will have its work cut out to better it.