Audi's 450bhp, 4wd RS5 coupe should be an M3 beater. But is it? Chris Harris reports 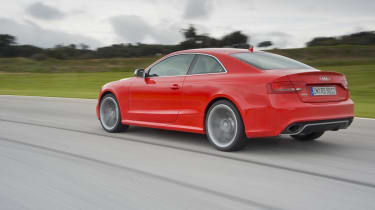 The latest RS model from Audi, the RS5 coupe, which joins the TTRS and RS6. There have never been three RS models on sale at the same time before. It uses a new 4.2-litre naturally aspirated V8 with 444bhp and 317lb ft of torque. The motor isn’t a re-worked version of the old RS4’s V8, it’s actually 4/5ths of the Audi R8's 5.2-litre V10.

The chassis is arguably more interesting, with Audi choosing this car to showcase its new Quattro transmission, and in particular its new centre differential. This is a compact, mechanically operated unit that can put up to 70 percent of torque to the front wheels and 85 to the rear. It works alongside a torque-vectoring system (braking of the inside wheel) and you can specify the rear sport differential that was introduced on the S4. Audi claims it’s the best all-wheel drive sports car chassis on sale. It also uses the word ‘oversteer’ in its launch preamble, which in the past has proved to be an unwise move.

A little confusing. This is not a direct M3 rival, it is much more the everyday GT with an amusing turn of speed. The confusion comes in the slight disharmony that exists between powertrain and chassis. Taken in isolation the RS5 excels in both categories: the engine is tuneful, smooth and loves to rev – in fact it needs to rev to feel anything like as fast as the figures suggest.

Thankfully, the 7-speed S-Tronic transmission is typically superb, even if the intermediate ratios are too long. The trouble is, the RS5 seems to like a quieter life. It is exceptionally refined, and with the DRC (Dynamic Ride Control) set to comfort it rides well on Spanish roads, but we need to drive it in the UK just to make sure. So you’re left with a car whose chassis wants you to relax, but whose engine and gearbox must be worked very hard to produce the performance you’d expect. Like I said, confusing.

The chassis is very clever though. It resists understeer better than anything this heavy has any right to. Traction is very impressive and it speaks volumes of the advances in mechanical grip found with this new centre diff that even running very fast on a circuit, the ESP hardly ever interrupts. But does it really feel like the rear axle is doing more than the front, like a GT-R? Of course it doesn’t, it’s an Audi.

Special mention must go to the new, round, steering wheel. It was Audi that gave us the hideous cut-off wheel a few years back: great news that it appears to have ditched the silly idea.

A BMW M3 is sharper, faster, far more interactive and – I have to assume - nothing like as relaxing to live with. The combination of S-Tronic and 4WD will really suit the UK market. The Mercedes C63 AMG is closer in concept and far more characterful, but on a damp road its driver would be all over the place following an RS5. Which actually sounds rather fun. The GT-R trounces the Audi for speed and dynamics but its interior is nothing like as appealing.

I’m going to say something a little controversial, but I was a touch disappointed with this car. It’s nothing like as characterful as the last RS4, and for all its technical brilliance it lacks roll-on performance – ironically just the type that the turbocharged S4 offers. It’s a fine car, but a long way from perfect.