Audi gives the A3 a new look, and uses some of the technology from the 402bhp quattro concept 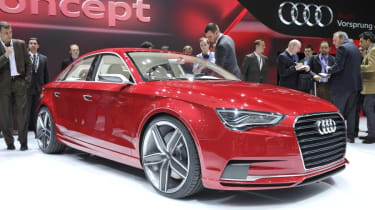 Geneva sees the launch of the Audi A3 Concept, a saloon version of the current A3 powered by the same running gear as the recently unveiled quattro concept.

Though appearing to tread on the toes of the RS3 Sportback somewhat, a production version of the concept is likely to be aimed at more saloon-oriented markets such as the USA and China. The latter in particular is becoming a bigger priority for premium manufacturers as sales continue to increase.

The A3 Concept is powered by the same 2.5 litre TFSI 5 cylinder engine that is found in the TT RS and RS3. This engine was also winner of evo’s 2009 Engine of the Year. However, it has been modified for this installation and provides the A3 Concept with 402bhp and 369 lb. ft. of torque, which represent gains of 67bhp and 37 lb. ft. over the RS3. This is enough, say Audi, for a 0-60mph time of just 4.1 seconds and an electronically limited top speed of 155mph. Despite this, the A3 Concept is said to return 31mpg and 212 g/km of carbon dioxide. Like the RS3, it is equipped with a seven-speed S-Tronic dual-clutch transmission.

In terms of size, the A3 Concept is probably most comparable to a VW Jetta, with the Audi being around 100mm shorter and 60mm wider. Aluminium is used throughout the body for the bonnet, doors and tailgate. Audi has also used carbon fibre-reinforced plastic (CFRP) in the twenty-inch wheels and air intakes. Total weight is still at 1,540 kg, however, and so not in quite the same vain as the Quattro concept, which weighed just 1,300 kg.

Suspension is broadly similar to the RS3 hatchback, with MacPherson struts at the front and a multi-link arrangement at the rear.

The interior of the A3 Concept features sports seats, the trademark Audi flat-bottomed steering wheel and new instruments. An eight-inch infotainment screen that is user-programmable dominates the centre console. It also features Audi’s Multi-Media Interface (MMI) with a touch pad that will enable the driver to ‘write’ commands. It has been suggested this will feature in Audi production models soon. As well as this, the A3 Concept features full Internet access courtesy of a UMTS model, a WLAN hotspot to allow email on the move and iPad holders are provided in the headrests. It is this level of infotainment, say Audi that ‘further emphasises why the brand is one of the leaders in this field’.

Although no news has been released on production, the feasibility of the A3 Concept becoming a series model is clear due to its sharing of underpinnings with current models.