We drive the striking 402bhp, 4wd quattro Concept car as Audi decides whether it makes production 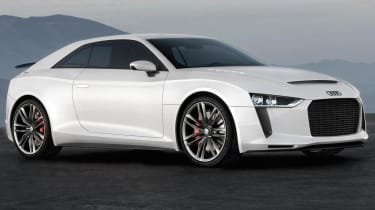 It’s a concept that brings the Sport quattro of 1983 into 2010. As it’s a concept, there’s only one at the moment but if the reactions to it are good (they haven’t been anything but) then it might make production in limited numbers…

It’s essentially a rather classy parts bin special. The chassis is based on the RS5 but with 150mm taken out of the middle. The engine is the 2.5-litre turbocharged five-cylinder from the TT RS but mounted longitudinally and tuned up to 402bhp. The most impressive thing is that through extensive use of carbonfibre (it’s everywhere you look inside) the weight has been kept down to just 1340kg. The production car would be another 40kg lighter still, apparently.

Because it’s a concept car, it doesn’t have the sport differential and torque vectoring that a production version would have. And as it’s the only one in the world, Audi were also a little precious about how hard and fast we drove the car. Nonetheless, some things were immediately obvious, for example the engine has just as much character as you would hope, with a low burble when you press the starter button and all sorts of cooings and twitterings from the turbo when you change gear or lift off the throttle anywhere above 3000rpm.

Despite steering that could do with being a bit quicker, you can feel how light it is and what a short wheelbase it has as it snaps into corners with the rear end feeling particularly keen. It also rides amazingly well for a concept car with big 20in wheels. Even after a limited drive I want one.

It’s the best one-off concept that I’ve driven – most are made of sticky-back plastic cereal boxes and can’t go above 30mph, if you can drive them at all – but without a price, it’s quite hard to compare it to anything. I would love it to be a 911 rival, but due to its limited numbers our bet is that it will cost somewhere around £150,000

If you put the sat-nav into ‘Race’ mode then it will apparently read you pace notes for the road ahead like a rally co-driver! For the full story on the quattro Concept look out for issue 153 of evo.