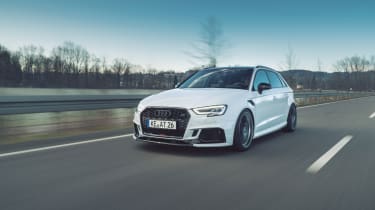 The new Audi RS4 Avant has certainly impressed us; it’s fast, composed and incredibly useable but we’ve not exactly fallen for it. Its engine, although effective and responsive, does lack character, especially when compared to the 2.5-litre turbocharged five-cylinder motor in its little brother, the RS3.

> Read our review of the Audi RS3

The Ur-Quattro-style noise the baby RS emits, its more compact size and, arguably, more handsome looks – especially in saloon form – could persuade many the RS3 is the fast, practical Audi to have. If only it were more powerful…

Well Abt, the Bavaria-based veteran Audi and VW Group tuner, may have the solution. Its Power R package increases the RS3’s engine output by 99bhp, taking it from 394bhp to 493bhp – a significant 49bhp more than the RS4’s 2.9-litre V6 can muster up as standard. Torque is improved, too, and goes from 354 to 420lb ft. 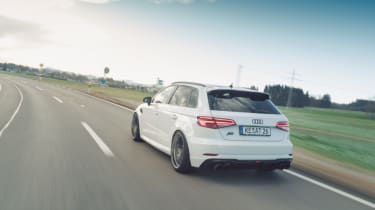 The regular RS3’s official 0-62mph time of 4.1sec, which incidentally is the same as the RS4 Avant’s, has been cut by 0.4sec thanks to the help of the extra power and torque. Abt’s claim that its more potent RS3 will hit 62mph in 3.7sec matches the times that we managed to extract from a standard car accelerating to 60mph. Whether a car with an additional 100bhp could go much quicker, or whether its tyres and drivetrain are at its limit, we wouldn’t be able to guess but we’d very much like to test the Abt RS3 to find out. Top speed is improved too, the restrictive 155mph limiter now extended to 186mph.

> Find out more about the new Audi RS4 Avant

Abt’s Power R pack for the RS3 isn’t solely about improving straight-line speed, though. To help you make the most of the added performance the kit includes bigger front brakes (up from 370mm discs to 380mm) and 20-inch black wheels to fit over the bigger anchors, as well as Abt-tuned springs and anti-roll bars.

The new wheels and stance aren’t the only visual changes that Abt has made. There’s a new front lip, grille addition and diffuser, all in gloss black. The typical-RS two large exhaust pipes are replaced with a new four-outlet system, too. 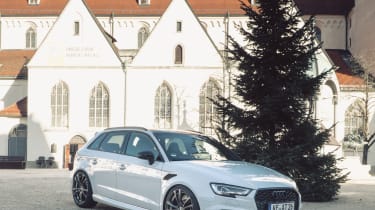 The interior is made fractionally more special by floor mats with RS3 embroidering on them as well as Abt door sills, gear shifter logo and projected entrance lights.

This entire pack is available for approximately £16,849 (€19,100) fitted. Alternatively, you could buy a complete vehicle for £65,623 (€74,390). Abt’s upgrades don’t stop at this pack though; there’s no more power available, but there are a set of lightweight 19-inch forged wheels still big enough to go over the new brakes (£8715, including tyres), front arch inserts (£555 fitted and painted), carbonfibre-backed seats (£2571 fitted) and height, bump and rebound adjustable coilovers developed in partnership with KW (£3017, including alignment and fitting).