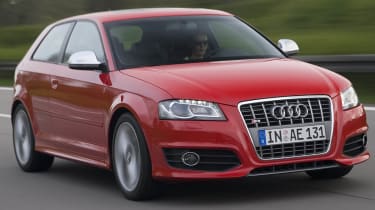 Audi has introduced its six-speed S-tronic transmission to the S3, which is available as an option from October 1 2008. It offers the choice of manual or automatic shifts, with the S3 gaining steering-wheel mounted paddles for the first time in its nine-year history.

Shifting, as with Volkswagen’s DSG version of the system, is lightning quick thanks to the dual-clutch operation – one clutch handling the odd gears, one to five, plus reverse, while the other handles second, fourth and sixth. As the driver changes into one gear, the other clutch is ready and waiting with the next gear to offer near-seamless acceleration.

This leads to a cut in 0-62mph time, down 0.2sec to 5.5sec in the three-door S3. Audi also boasts that economy and emissions are improved, at 34mpg and 193g/km compared to the manual’s 33.2mpg and 198g/km. The Quattro four-wheel-drive system is also boosted to react faster to the car’s 261bhp and 258lb ft of torque.