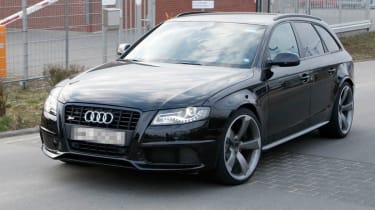 Are these the first pictures of the new Audi RS4? It looks likely from these images taken at the Nurburgring that Audi is some way down the road in developing a successor to the much-vaunted RS4 that ceased production in 2008.   The new car’s details are not known at present outside of Ingolstadt, but we can take an educated guess as to what drivetrain might lurk behind the S4 badged mule. The 21in RS5 wheels, wider track and larger front intakes are a give away as to this being something a little more than it is letting on… Whether the production car will feature the RS5’s engine, a 4.2-litre naturally aspirated V8 with 444bhp, or the smaller capacity 3-litre supercharged V6 from the S4 with the wick turned up, is yet to be seen. It should boast a four-wheel-drive quattro drivetrain and twin-cltuch S Tronic gearbox, though.

It will have to compete on pace with its talented German compatriots, BMW’s 414bhp M3 and Mercedes’ 457bhp C63 AMG. We’d wager a pricetag north of  £52,000 is likely, aiming it squarely at the competition. There will be saloon and estate variants, the latter ‘Avant’ photographed here. Although Audi only built the last RS4 between 2006 and 2008, the German manufacturer managed to sell around 10,000 of them, and our Fast Fleet long-termer certainly charmed its keeper, John Barker. After the disappointment of the current RS5, let’s hope the new, third-generation RS4 is a return to form.