Good for the tan, great on the ears, yet lacks pizzazz 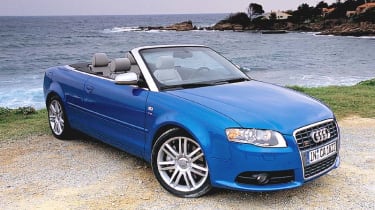 Cabriolet is an odd word. It conjures up thoughts of a car that's luxurious and alluring, but not particularly sporty. Stick 'S4' in front of it and the plot becomes yet more confusing. Now it must be sporty. Mustn't it? Yet the only people I can imagine driving the new S4 Cabriolet have mahogany skin, live in St Tropez, and never take their dark glasses off. Perhaps where the cabriolet is concerned, the 'S' stands for Style or Sumptuousness instead of Sport? Push the customer profiles to the side for a minute and what have you got? Well, for starters, with the hood down you have the best platform for listening to Audi's glorious 4.2 V8. It's an engine that never sounds hurried or manic, with a rich, melodious growl underlying each different squeeze of throttle. Floor it in, say, third and as it swells and pulls from a few hundred low, rumbling rpm to a top-end howl it goes through a whole host of sonic stages, the most curious of which sounds something like a helicopter taking off. Raised, the three-layer acoustic hood does a highly impressive job of cocooning you, achieving noise levels scarcely louder than the saloon's. The roof concertinas itself behind the rear seats in 21sec and you can operate it at up to 20mph, although stray beyond that and the mechanism will grind to a halt, leaving you driving along looking like an idiot with a sort of monstrous canvas fly-catcher towering above you; don't ask me how I know... The S4 Cab is easy to drive quickly. Scuttle-shake is present but not intrusive, merely manifesting itself over bumps rather as though you had the vibrate function on your mobile gently plumbed into the steering wheel and seat. A bit of trail braking helps counter the inherent understeer, but to work the 40/60 torque split in the quattro system to your advantage you really have to ease the nose into a corner quite gingerly, hook it up and then use all the power after the apex. It's effective, but not an experience that'll make you long to be out driving it all the time. The S4 is very rapid, luxurious transport, but then so is the 3.0 TDi. It'll appeal to our tanned, Cannes socialite by virtue of being the most expensive cabriolet in the range, but it's in the virtuoso performance from the quad pipes that the thrill of driving the S4 lies.