Audi has revealed the first picture and details of next year's R18 e-tron racer, ahead of its full reveal before the end of the year 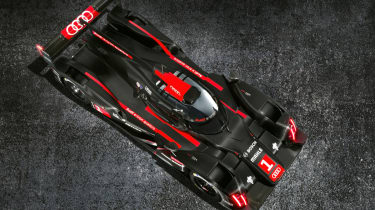 Audi has released full details of next year’s R18 e-tron racer, which was tested for the first time at the Sebring race circuit in the USA. The car has been redesigned from the ground-up, featuring new technology to take advantage of the 2014 regulations.

Despite the similar looks, the car is actually all-new. It plays to the strengths of the new LMP1 regulations, which have been designed to achieve similar lap times while consuming less fuel.

Under the skin the new R18 gets a further development of the V6 TDI, which powers the rear wheels. The front wheels are powered by a hybrid system, which Audi calls ERS-K (Energy Recovery System Kinetic). This is a regenerative system, which harvests kinetic energy from the braking system, as well as other areas.

Audi is also using a flywheel energy storage system, as well as a turbocharger that can harness excess boost pressure and turn it into yet more electric energy. The overall energy saving is supposed to be around 30 per cent over the last year’s car.

The new car is also slightly narrower than last year, and is significantly more aerodynamic despite some prohibitive rule changes to improve driver safety.

Replacing the current R18 will be no mean feat, as it has helped to maintain the team’s dominance of the FIA World Endurance Championship (including winning 11 of the last 13 Le Mans 24 Hour races), as well as the American Le Mans Series. For the first time ever, Audi will be facing Porsche at the Le Mans in 2014, which means the car will have to be better than ever to stay at the top, as well as Toyota, who returned to the sport last year.