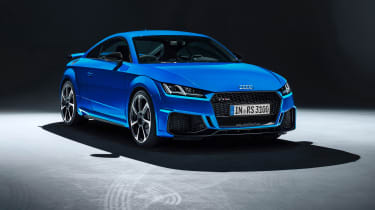 The range-topping TT has received minor tweaks for 2019, including a new rear wing and interior features, although mechanically has been left largely unchanged.

Sporting a redesigned front end, rear wing and a number of other tweaks, the new TT RS is even sharper than before. The model’s front air intakes have seen an increase in size, giving it an even more aggressive appearance - the increase in size isn’t for show either, as Audi claims it has fitted additional radiators for optimal cooling. One of the most noticeable tweaks is the rear wing, which now features motorsport-inspired side winglets for added aggression.

Inside, the TT RS Coupe and Roadster gain a new red 12 o’clock marker on the steering wheel, while features such as the brand’s Virtual Cockpit system, MMI navigation plus, optional WiFi hotspot preparation and 680 watt Bang & Olufsen sound system are carried over from the previous car. Should you want to personalize your TT RS’s then Audi’s exclusive program will allow you to pick and choose your favourite colours and finishes (although it’ll come at a cost). If you’d just like a splash of brightness though, the new ‘RS design package’ adds hints of red or blue to certain areas of the car, such as the air vent surrounds, seat belts and floor mats. 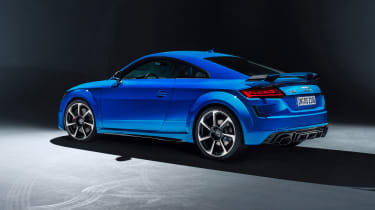 Eight exterior colours are available in total including three new colours that are exclusively available for TT RS - Kyalami Green, Pulse Orange and Turbo Blue. Matte aluminum and gloss black styling packages can also be chosen to highlight the front splitter and rear wing, alongside different colours for the roadster’s top should you want to change from the standard black finish.

With the familiar 2.5-litre turbocharged five-cylinder pushing almost 400bhp to all four wheels, the TT RS is a blisteringly quick car, with 0-62mph in a supercar-rivalling 3.7secs and a top speed at 155mph, or 174mph if you tick the derestricted top speed box. These figures are no better than the outgoing model, although we can’t say it needed and more performance.

The new TT RS comes with the same seven-speed S tronic gearbox as seen previously alongside ventilated and perforated steel discs behind either 19-inch or 20-inch wheels - calipers are black as standard but can be painted red at a cost. Adaptive dampers are also available as an option

The facelifted TT RS Coupe and Roadster models will be available to order on February 7th, hitting dealerships in Europe from spring 2019. Prices start from around £60,000 for the Coupe and around £62,000 for the Roadster.