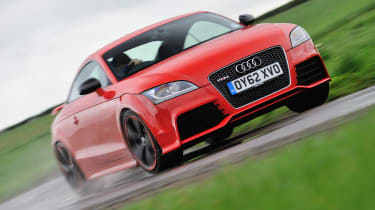 The Audi TT RS Plus, which as you may have guessed, boosts the horsepower and top speed (among other things) of the warbling five-cylinder coupe. It’s the hottest TT you can buy, and it's priced from £49,245.

Order your Audi TT RS in Plus spec and the characterful, transversely mounted 2.5-litre five-cylinder engine gets an extra dollop of power, peaking at 355bhp (up 20bhp compared to the regular TT RS) and accompanied by a thumping 343lb ft of torque (up 11lb ft). The speed limiter is also raised from 155mph to 174. The extra power cuts 0.2sec from the 0-62mph dash, resulting in a time of 4.3sec for the six-speed manual car, or 4.1sec with the optional seven-speed S-tronic dual-clutch transmission, as fitted to our test car.

The Plus feels properly rapid on the road, all that power having just 1475kg to propel (25kg less in the manual car). Being four-wheel drive, traction is never an issue, either. The S-tronic ’box offers lightning-fast changes with a delicious thrap on upshifts when you’re gunning it. Add in the constantly warbling motor and this RS teases your aural senses like no other TT.

Less good is the steering. The electrically assisted set-up is horribly light when you set off, feeling completely at odds with the sporting pretence of this car. As you build up speed, the assistance reduces, but at no point do you get a real sense of what the front wheels are doing; the steering wheel is simply a device to guide the car down the road with, rather than something to glean information from.

Thankfully, this car grips so well, cornering speed is mainly governed by your conscience rather than front-end grip, making the TT RS searingly fast cross-country. Dig even deeper, though, and mild understeer is the eventual outcome, with the chassis never really offering anything in the way of adjustability.

The TT RS Plus is a surprisingly likeable thing, mainly because of its shocking pace. The trouble comes when you consider what it has to compete with: the Plus goes head to head with the talented new Porsche Cayman S (£48,783) which is more entertaining and rewarding to drive, and unlike the TT, is perceived as a £50k car.

Our test car is fitted with ‘Audi Magnetic Ride’ adaptive dampers (a £970 option), which have two driver-selectable settings, Normal and Sport. However, the latter mode is so annoyingly firm that I soon find myself avoiding it altogether.