Audi has unveiled the Allroad Shooting Brake concept, giving us an idea of how the next TT will look. Video, details and live show pictures here 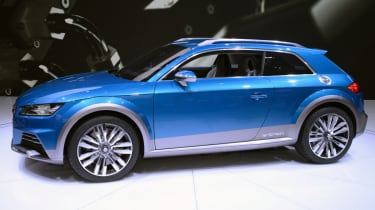 The concept is powered by a 288bhp 2.0-litre TFSI petrol engine up front, combined two electric motors at the rear – all integrated via the hybrid e-tron dual-clutch transmission. When in its combined petrol and electric Sport mode, combined power is rated at 402bhp with 480lb ft of torque.

Performance is swift, with 0-62mph coming up in 4.6secs and a claimed top speed of 155mph. This is combined with claimed fuel economy of 148mpg, and CO2 emissions of 45g/km.

In pure EV mode, the Shooting Brake concept can be driven at speeds of up to 81mph, for up to 31 miles thanks to the 8.8kWh lithium-ion battery. As well as charging on the move, it can also be topped up via a wall socket.

Like with the previous TT Ultra concept car, the bodywork is made up of lightweight aluminium and carbon fibre reinforced plastics to keep weight down, which could make it through to a future high-performance TT variant. Audi claims an unladen weight of 1600kg for the show car.