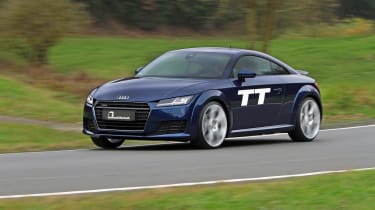 The new Audi TT hasn't been in production long, but that hasn't stopped aftermarket companies racing to produce its first performance modifications. German tuner B&B has become the first to enter the ring, tuning the entry level TT to achieve performance figures that surpass those of Audi's hottest factory variant. Developing three performance stage upgrades, B&B's mods increase power of the base TT to 355bhp, slashing the 0-62 time by 1.2sec to 4.8sec and 0-124mph time by 6.9sec to just 17.4sec.

B&B's stage one kit sees the entry-level petrol 2-litre TFSI four-pot boosted to 296bhp from the stock 227bhp, whilst torque increases from 272lb ft to 310lb ft. The increase comes thanks to adjustments to fuel injection and an increase in boost from the turbo. The first stage costs just shy of £950 in Germany, and for a little more can include an improved induction setup that increases power by a further 9bhp and 11lb ft of torque.

Stage two sees a big jump in price - it costs £3126 - and brings further increases in performance. Swapping the standard exhaust for a freer breathing system with a less restrictive sports catalyst, engine and turbo temperatures can be kept lower, which combined with an added 0.25 bar increases pressure, sees power grow to 321bhp and torque to 332lb ft.

The stage three package is where power receives a substantial hit. A bigger turbo, intercooler, exhaust and upgrades to supporting components sees power reach a substantial 355bhp and torque a hefty 369lb ft. Fast as it may be, the top level package costs a whopping £7880.

If you give B&B another £1025 it'll also add an oil cooler; add £235 to that and your TT will sit lower by 30mm at the front and 25mm at the rear with sports springs. Throw even more money B&B's way and your new TT can wear bigger 20-inch 265-30 wheels and tyres, anti-roll bars, brake calipers with as many as six-pistons, or even a full-blow racing exhaust that frees up breathing to enable an extra 20bhp to be squeezed out of the 2-litre unit.

Such is the strength of Audi's gearboxes, that the three stage tuning packages are available with both the S tronic auto and six-speed manual.

With all mods, you'll have spent in excess of £10,600. Gulp. But don't forget, that does buy you an Audi TT capable of reaching 60 faster than a TTS - the 4.8sec dash to 62 is one tenth quicker than the most potent factory TT - and a derestricted top speed of 171mph. That's enough to worry a Porsche 911 Carrera.