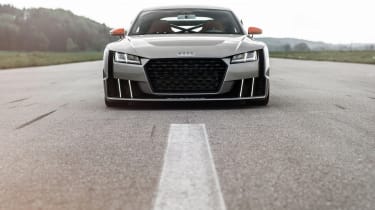 Audi has unveiled details of a brand new TT Clubsport Turbo concept which will feature 591bhp generated from a 2.5-litre TFSI engine.

The new power unit uses an electrically driven biturbo compressor that according to Audi is 'close to being production ready'. This could mean monumental power figures like the concept's 479.4lb ft of torque generated from a 2.5-litre TFSI engine. 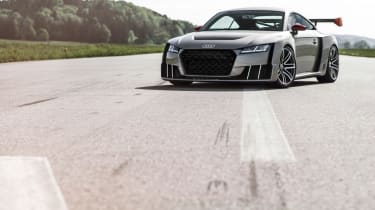 It also allows Audi to give the engine a wide power band, with the entirety of the car's torque being generated from 3000 to 7000 rpm.

The TT Clubsport concept is a stripped out and simplified TT, featuring a huge rear wing and a wider stance. The interior includes five point harnesses and a gated manual six-speed shifter. The entire package weighs 1396kg. Designed to be reminiscent of the Audi 90 IMSA GTO race car from the 1980s, the TT Clubsport Turbo concept is the most hardcore and performance orientated TT ever imagined.

Performance stats include a promised 0-62mph time of 3.6secs as well as a top speed of 192mph. Audi is keen to emphasise how the electric biturbo allows the concept to cover ground. The car manages its first 16 metres from standstill in 2.5sec, a 6-metre increase over a car that doesn't use the same innovation. 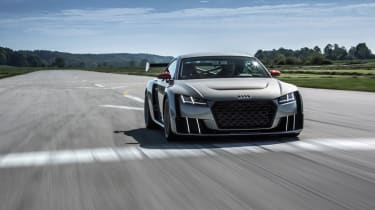 The concept of e-turbos has been around for a while. Audi already has a near production ready version of the system for its TDI engines. Increasing engine response and offering high levels of acceleration from low engine speeds, the electric biturbo is an innovation we will likely see coming to road cars very soon indeed.

As for the TT Clubsport, aside from the engine, other changes from the standard road car include coilover suspension and an electronic lifter to stop bodywork damage while driving the car about town. Audi has also opted to fit carbon-ceramic brake discs to all four wheels.

Inside Audi has trimmed the car in carbon-fibre reinforced plastic, as well as black and orange alcantara. The virtual cockpit found in the TT road car remains. A roll cage has also been added produced from high-strength titanium tubes.

For those interested in seeing the TT Clubsport Turbo concept in person, it will be appearing at the Wörthersee Tour in Austria on May 13th.