A vision of a fast, sophisticated, electric and partly autonomous future Bentley flagship 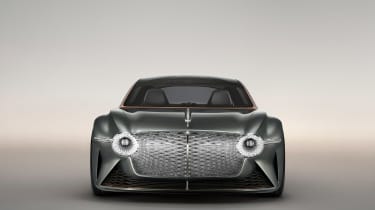 Bentley has given us a vision into its future with the reveal of the EXP 100 GT Concept, a sleek, electric GT that previews not only the brand’s design direction, but a new emphasis on sustainability too.

Rather than a specific preview of a production model, the EXP 100 GT instead looks further ahead, envisaging what a flagship Bentley might look like in 2035. If this sounds far-fetched, it’s worth remembering that’s only two normal model cycles away from now.

The EXP 100 GT’s powertrain is of electric means, combining solid-state battery technology powering next-generation electric motors. There are four in total, one powering each wheel, and in the process allows for full individual torque vectoring. Bentley claims the EXP 100 GT will reach 62mph in 2.5sec, with a top speed of over 186mph, but as these are merely projections of what might be feasible in 2035, there is no way of substantiating these claims.

Instead, the lessons to be learnt are in the concept’s design language and its ideology of what the future of grand touring might be. From that we can see, opulence and ostentation remain key elements of Bentley’s future. The core design starts with a new proportion set, one defined by the relatively short bonnet and generous rear overhang. This is combined with Bentley’s iconic haunches, and an even more generous take on its current surfacing technique, with a combination of crisp lines and rounded, muscular forms between them.

The stretched glasshouse and tapering tail exaggerate the EXP 100 GT’s rear overhang, forming what might well become a new design element synonymous with luxury car design in the future. Lagonda, Aston Martin’s forthcoming EV-only luxury brand, also portrays this technique. But we then approach the EXP 100 GT’s most dramatic aesthetic feature, namely the large headlight and grille graphic that have now been combined into a single interactive element that glows and waves lighting patterns across it. It’s a controversial element, but as Bentley sees this specific design as being a statement vehicle, it’s not surprising to see it on the edge of overdone. 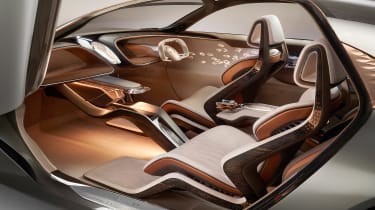 The interior is equally extravagant, with a combination of 5000-year-old ‘copperised’ reclaimed driftwood, hand-cut crystal and more, but unlike never before, each material has been through a process of intense scrutiny in regards to its sustainability. The interior layout supports both autonomous and non-autonomous modes, but providing the ultimate grand touring experience remains the most important factor, as one might expect with a Bentley.

Will a Bentley in 2035 actually look like the EXP 100 GT though? Although we’re assured this it is only a look into the mid-term future, Bentley is known to be in the process of developing its first all-electric model, which will be revealed in the next two years. We also know that it will likely utilise the new Porsche-developed J1 platform used for the Taycan and e-Tron GT, which itself features a proportion set uncannily similar to that seen in this EXP 100 GT concept. Perhaps this concept isn’t quite so far-fetched after all. 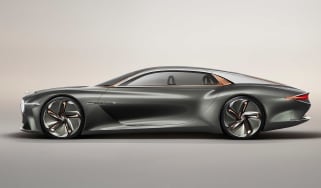 Move to EVs will be preceded by plug-in hybrids across the range – and the end of the W12
£1.5m Bentley Bacalar revealed in six new designs