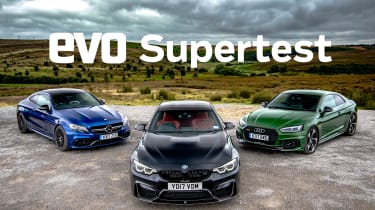 And finally to the Bedford Autodrome, to see how our contenders compare on a hot lap.

From the driver’s seat  it feels like there might be a major upset… First up is the most powerful car, the Mercedes. The challenge with cars that have the potential for massive oversteer is that getting the speed out of them means treading a thin line, and slipping off it can turn very quickly into two fat black lines. This is annoying in the slower corners, when you just want to get on with things, and heart-pounding when it happens through the fastest corner on the lap…

Stability control was set to Sport for the warm-up lap and first flyer, allowing some slip and thus showing where traction is likely to be an issue, which is pretty much everywhere. It does a good job, keeping the tail in line without being too intrusive, but start to push more and there are sections where it feels the car is being held back too much. So, stability control is disabled and the challenge of walking the line begins.

There’s little warning of when the rear is about to break free, and when it does the swing is generous. Containing it takes patience and quick reactions but the speed does come, though in truth no lap feels completely clean. Each car gets three flying laps, and the C63’s best is 1:25.6. To its credit, the car’s optional hybrid carbon front/cast-iron rear brake setup lasts very well and the tyres look evenly scrubbed across the tread. 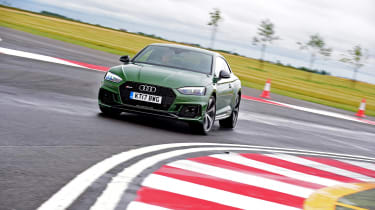 The BMW M4 is quite a contrast, firstly because its engine sounds so loud, even wearing a helmet. On the first flying lap it’s obvious that, like the Merc, the BMW’s slackened-off stability control is too restrictive. The car feels lighter and better balanced in the quick stuff but it has a little more initial understeer, so it feels like you have to slow it down more for the slower turns. It will kick its tail out early like the Merc but ease the throttle and it steadies quickly so you don’t have to back out and wait. Neat is best, of course, and you can be. Shame the upshift lights in the rev-counter are hard to see and that the brakes feel soft from the off, suggesting we’d had the best of them in the formal brake test. Still, 1:23.4 is an emphatic two seconds a lap faster than the Mercedes.

What a contrast the Audi is. The work rate it demands is dramatically lower but it feels very effective as well as easy to drive. Where in the BMW and Mercedes you’re feathering the throttle, the Audi is nailed, backing off only to rein in understeer. It’s not an inert all-wheel-drive car, either; stability control off, it feels almost like you’re backing the car into the first hairpin and then hard on the throttle to sling-shot from the apex.

Throttle pick-up feels a bit slow – a bit soft at times, maybe – because you’re mashing rather than feathering, but the car’s eagerness to turn and its stupendous traction feel enough to deliver an upset. It’s a slight disappointment that it only manages 1:25.0, splitting the M4 and C63. 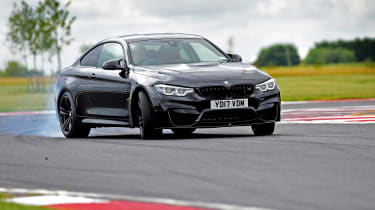 Study the speeds and G ratings on the track map above and you’ll soon start to build a picture not only of each car’s individual character, but where it gains and loses against its rivals.

The first thing you notice is just how much more speed the M4 carries through the faster corners and then builds upon once it’s on the straights. The confidence that its weight distribution and balance brings is clear to see with the corner speeds it achieves.

More interesting is what the raw data betrays about the Audi’s performance. In most of the corners, and particularly the tighter ones, it’s on the power before the other two, proof of its fabulous traction and immense low-down grunt. But every time it’s then surpassed along the following straight by the other pair, which while unable to get on the power so soon can accelerate at a greater rate thereafter. The traction and positive turn-in of the RS5 is also evident in the speeds through Club Chicane, and neither is it a surprise that it’s the fastest car through Tower: there are no high-speed oversteer worries to be felt in the Audi. 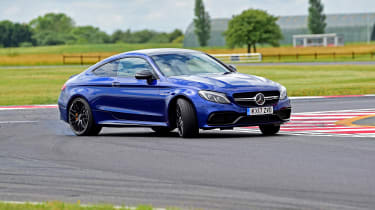 As for the Merc, it masks its weight and traction issues out of the tighter corners via the enormous torque of its V8, allowing it to quickly surpass the Audi – after the Palmer Curves, for instance – and keep the M4 at least partially in sight. But it’s also no surprise that it’s slowest through the quicker curves, where the mass begins to tell and its spiky over-the-limit behaviour preoccupies the mind. For evidence, look no further than the respective speeds through the fast right of Tower. 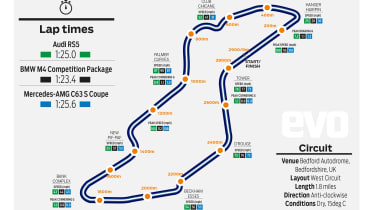