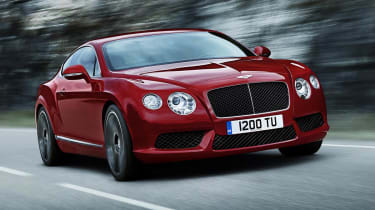 Bentley has unveiled its new V8-engined Continental GT. The coupe – along with its GTC convertible sibling – has gained a 4.0-litre twin-turbo unit that will dramatically cut CO2 emissions and fuel consumption over the 6.0-litre W12 all Contis have previously used. This engine continues, but expect the new V8 to steal most of its sales. That’s thanks to a 40 per cent improvement in both mpg and CO2 figures. While Bentley remains tight-lipped on actual figures – perhaps the car is yet to complete its official testing – expect around 24mpg and sub-255g/km, taking Bentley out of the top tax band (M) for the first time. The firm has revealed that 500 miles will be possible on one tank of fuel, an improvement of over 150 miles. All of this is achieved without a huge drop in performance. Despite a four-cylinder and 2000cc deficit, it boasts 500bhp at 6000rpm and 487lb ft at 1700rpm. Respective drops of 67bhp and 29lb ft, but with maximum power and torque delivered at the same points in the rev range.  Such lowly torque delivery ensures 0-60mph will still take less than 5sec, while the top speed remains supercar-like at 180mph. The new V8 engine – which is related to the unit in Audi’s new S6, S7 and S8 – saves fuel and cuts CO2 via some clever technology, the headline act being cylinder shut-off which allows it to run as a V4 engine under light throttle load. The engine is direct injection, too, and is hooked up to a new close-ratio 8-speed automatic gearbox. All four wheels are driven, via a Torsen diff and a 40:60 rear-biased power ratio. You’ll be able to tell V8 Contis apart from their potent W12 relatives via small styling flourishes, including red enamel Bentley ‘B’ badges and figure-of-eight exhaust pipes. Bentley also promises they’ll emit an ‘instantly recognisable growl’… The wraps will be pulled off the Bentley Continental GT and GTC V8s at January’s 2012 Detroit motor show, when we can expect to learn firm CO2, mpg and pricing details.