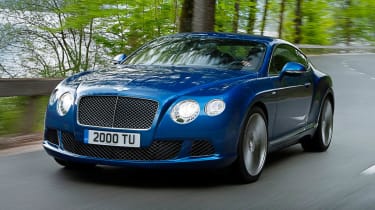 Bentley has launched the new Continental GT Speed, its fastest production model yet with a top speed of 205mph.  At the heart of the new model is an uprated version of Bentley’s 6-litre, twin turbocharged W12 engine, producing 616bhp and 590lb ft of torque to get the car from 0-60mph in 4.0sec.  The immense power is transmitted via a new close-ratio, eight-speed automatic transmission, which uses intelligent adaptive control software that aims to deliver imperceptible gear changes, and the permanent all-wheel drive system, with employs a central Torsen differential. The changes to the W12 engine give the new car a 16bhp improvement on its predecessor, the first generation GT Speed from 2007, while the new gearbox makes a significant contribution to an overall 12 per cent improvement in fuel economy and CO2 emissions. Uprated steering and suspension, as well as a lowered ride height, help give a sportier stance and more agile driving experience, with the car running on the unique 21in Speed wheels, which come fitted with Pirelli PZero performance tyres.  There are no major changes to the car’s design over a regular Continental GT, with just a few subtle differences aimed to reinforce the sporting character of the new model, including a dark-tinted matrix front grille, lower air intakes and ‘rifled’ finish to the exhaust tailpipes. The car will make its international debut at the 2012 Goodwood Festival of Speed from June 29 until July 1, with Juha Kankkunen, Guy Smith and Derek Bell running a pre-production GT Speed up the Goodwood hillclimb twice a day.  Prices for the 2012 Bentley Continental GT Speed should start at around £150,000. Orders for the car are being taken now, with deliveries beginning this October.