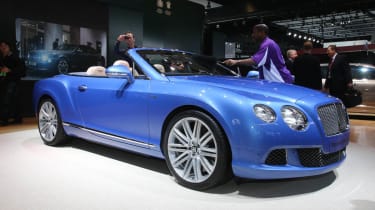 With 616bhp and 590lb ft, it can defy its 2.4-ton bulk with a 4.1sec 0-60mph time and a 202mph top speed – making it the world’s swiftest four-seater cabriolet. Bentley claims it’s more economical than its predecessor, though 19mpg and 347g/km of CO2 are unlikely to win it green-thinking awards.

Compared to the standard Continental GTC, the speed rides 10mm lower, gets 21in alloy wheels, retuned steering, new tailpipes, a more aggressive grille and a standard Mulliner-spec interior. A small boot-lid spoiler is the only visual nod towards improved aerodynamics.

The covers were whipped off the GTC Speed alongside some good news from Bentley; despite an unsettled car market, its sales rose 22 per cent in 2012, with 8510 cars registered worldwide.

Subscribe today to have every issue of evo delivered straight to you. You'll SAVE 39% on the shop price, and get evo for its original cover price for a whole year!
Subscribe now
Video of the new Bentley Continental GTC Speed in action...
Full 2013 Detroit motor show coverage here
Follow us on TwitterFollow us on FacebookEmail us