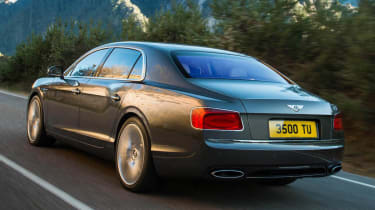 Bentley has given its Continental Flying Spur saloon a surprise major remodelling.

The changes are considerably deeper than those made to the equally venerable Continental GT coupe and GTC cabrio last year. With new doors and an entirely different back end, the Spur looks like an all-new car. The four-door version of the Continental has always been a minority taste in Europe, but it’s become a big hit in China – perhaps explaining why so much attention has been given to its refresh.

The updated car is now 50kg lighter, features a composite bootlid and an aluminium front end, and is powered by a 616bhp version of the familiar 6-litre W12 engine (up 64bhp). It also gets the new eight-speed ZF automatic gearbox to improve both acceleration and economy. The claimed 4.3sec 0-60mph time is impressive for something that still weighs 2475kg, as is the 0-100mph time of 9.5sec.

The official 19.2mpg is less impressive; even the similarly vast Rolls-Royce Ghost manages 20mpg. Of course, fuel economy is unlikely to be a deal-breaker for potential Flying Spur buyers – and the car is also set to get the more frugal Audi-Bentley V8 later on. A Speed version is also a near-certainty.

The car’s core architecture and wheelbase are unchanged, but the front and rear tracks have been widened slightly. Underbody revisions include a new undertray to improve acoustic shielding and airflow, the drag coefficient dropping from Cd 0.31 to Cd 0.29. As before, there’s no active aero – impressive considering the 200mph top speed. Spec tweaks include an optional multimedia system with twin 10in rear screens.

Bentley insiders admit that the firm missed a trick by not giving the Continental GT and GTC a bigger visual makeover when they were revised last year. The Conti clan will have to survive until 2017, when all-new models will be built on the VW Group’s ‘luxury’ MSB platform. This new Spur goes on sale later this year, at a likely similar price to the outgoing model, which is £133,200 basic. The model will get its full public reveal at the 2013 Geneva motor show.