Bentley confirms new SUV model, which will be made in the UK - and aims to be the world's fastest. Price, release date and specs here 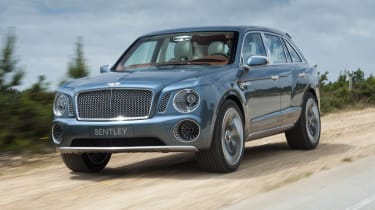 Bentley has confirmed production of its new SUV model. The company’s fourth model – complementing the Continental GT, Flying Spur and Mulsanne – will go on sale in 2016.

The good news for the UK is that, like its siblings, it will be built in Crewe. It was initially thought that any new SUV model would be produced in Slovakia along side the Audi Q7, but over 1000 new jobs have now been created by an £800million investment in both Crewe and new model development.

It’s a deal big enough to demand Prime Minister David Cameron’s attendance. ‘One sector that we know is sprinting ahead in the global race is our booming automotive industry’ said Cameron. ‘One vehicle rolls off a production line somewhere in the UK every 20 seconds and we have just launched the government's Automotive Industrial Strategy to help continue this success for years to come. I am delighted that Bentley will be building their new vehicle here.’

Bentley sits among the UK’s other car brands and manufacturers as an example of high export success – four out of every five cars made at Crewe heads to an overseas buyer. This figure is only set to rise with the launch of an SUV, which will appeal predominantly to Eastern markets, China in particular.

Bentley’s SUV was previewed at the 2012 Geneva motor show by the EXP9F, a car which divided opinion by rather haphazardly applying Bentley’s styling signatures to a large SUV shape. The production car is set to look a lot different, with Luc Donckerwolke – responsible for the styling of a number of SEATs and the Lamborghini Gallardo – tasked with applying the Flying Spur’s looks to a bigger body.

The man responsible for the Cayenne’s development has also been moved onto the project, and given how important that car is to Porsche nowadays, it gives the Bentley’s chances of success a big boost. The company also released a sketch of the new SUV in profile, and although it gives little detail away, it appears to share much closer proportions to the Cayman than the previous concept.

The new model is likely to use twin-turbo V8 petrol power and Bentley is aiming to lay claim to the world’s fastest SUV – the 542bhp Porsche Cayenne Turbo S, with its 175mph top speed and 4.5sec 0-62 time, gives it something to shoot for.

The Bentley 4x4 will share componentry with its VW Group SUV siblings, including the next Cayenne and Audi Q7, as well as potentially the Lamborghini Urus if it makes production. It will also do its best to muscle in on the 2013 Range Rover's market share. The Range Rover is currently the only full-size premium SUV you can buy that offers a British badge, and is something VW Group currently can’t offer.

Annual sales of 5000 cars are forecast, which would contribute massively to Bentley’s overall sales, which measured 8510 in 2012. It also hints at the SUV becoming Bentley's best selling model. UK prices are not confirmed, however a starting price of around £125,000 is likely - positioned above the top Range Rover V8 Autobiography and Porsche Cayenne Turbo S models.