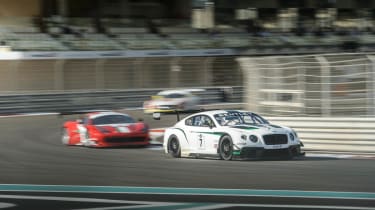 Bentley has completed the first phase in its return to motorsport. It has entered one car in the Gulf 12 hours, and after six hours the Continental GT3 lies in third place overall against competition from Ferraris, McLarens, Mercedes, Porsches and Lamborghinis at the Yas Marina circuit in Abu Dhabi.

The new Continental GT3 racecar has been designed and built with partner M-Sport. It is based on the Continental V8 road car - albeit at 1300kgs, it’s some 1000kg lighter than the street version. Key changes to the racecar include carbonfibre bodywork, a roll cage, aerodynamic additions, slick tyres and a sequential manual gearbox. The most significant change under the bonnet is the repositioning of the two turbos outside of the V. This allows the engine to be mounted lower and further back.

Bentley is calling the 2013 Gulf 12 Hours a 'test race'. Data gathered during the event will be analysed and improvements made during the car's continued test programme. Drivers Steven Kane, Andy Meyrick and 2003 Le Mans winner (driving a Bentley) Guy Smith have raced the car hard, albeit without incident, for the first six hours and expect performance to improve as temperatures drop during the evening to 15 degrees.

Daytime temperatures during the first six hours reached 30 degrees in the desert sun.