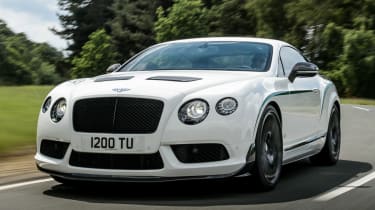 With influence from racing engineers the GT3-R has been put on a diet, enabling it to lose 100kg when compared with the GT V8 S of which it is based. Pushing the lightened car along will be an sharper version of the 4-litre twin-turbo V8, developing 572bhp and 516lb ft of torque – an increase of 51bhp and 18lb ft – and sending power to all four wheels through an eight-speed ZF automatic gearbox.

To produce the power increase Bentley has increased boost from the turbochargers and developed new engine mapping, whilst shortened gear ratios emphasise this car’s focus on acceleration (as opposed to long distance cruising much like the standard car). Adding these ingredients together sees the GT3-R’s 0-60 dash dispatched with in just 3.6secs, some seven tenths less than the standard GT V8 S. Top speed has been reduced to 170mph, but there’s no doubting you’ll be able to get there a lot faster.

The chassis has received a hardened state of tune too, with a modified Electronic Stability Control programme and optimised air spring and damper rates giving the GT3-R a track focused setup. This is matched by hardened Sport mode settings, though the normal Drive mode remains comparatively soft to ensure the more potent GT3-R still possesses the heart of long distance GT cruiser.

This is confirmed by the interior, which whilst being tailored with a more sporting look, still features the range of creature comforts you’d expect from a new car sporting the Flying B. A pair of bespoke carbonfibre seats are covered in contrasting black and green Alcantara and leather, whilst the rear seats are removed, in their place sitting a rear cabin trimmed in more leather, Alcantara and carbonfibre.

Outside, the GT3-R has been given a light sprinkling of racer, with carbonfibre trim, bonnet vents and aggressive 21-inch forged alloy wheels wrapped in performance Pirelli rubber. These sit ahead of Bentley’s beefy 420mm and 356mm Carbon Silicon Carbide discs, pinched by eight-piston callipers. In fact, Bentley claims the 10 megajoules of energy these brakes can produce is enough to power a family home for six hours…

Looking back over the body, streaks of green stretch over the Glacier White paintwork, whilst a carbonfibre rear wing, front spoiler, titanium exhaust (some 7kg lighter than the standard system) and black surrounds complete the GT3 look.

Bentley offers free standard servicing on the new car for four years, coming in every 10,000 miles up to 30,000 miles. Order books are now open for the GT3-R, with deliveries expected to start late this year. Prices will be announced at June’s Goodwood Festival of Speed, but expect the race inspired GT to require a hefty premium over the standard V8 S’ £139,000 price tag.