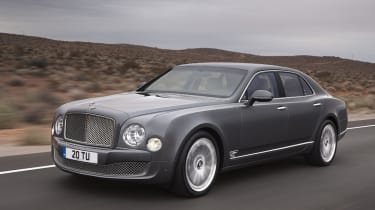 Bentley will be revealing a new version of its Mulsanne super-limo at next month's Geneva motor show. Called the Mulliner Driving Specification, the model will add some driver-centric features to the Mulsanne's already broad range of talents. Most notable of these is the addition of a Sport mode to the Driver Dynamics Control. Selected via the existing rotary switch mounted next to the gear selector, the Sport setting will sharpen up the car's steering and firm up the ride, allowing the driver to hustle the car named after the world's most famous straight through a couple of corners with more confidence. The Mulliner Driving Specification will also feature unique 21-inch lightweight two-piece alloys, special quilted leather, drilled alloy pedals and stainless steel 'Flying B' vents on the car's flanks.  Under the bonnet, the specification remains unchanged, meaning you get the same 505bhp twin-turbo 6.75-litre V8, complete with 712lb ft of torque arriving at just 1750rpm. The 0-60mph dash takes just 5.1sec and the car will go on to reach a top speed of 184mph. Bentley hasn't confirmed a price for the Mulsanne Mulliner Driving Specification, but expect it to command a premium over the standard car’s £220,000 price tag.