Bentley has launched the new Mulsanne-based Hybrid concept ahead of the Beijing motor show. Pictures and details here 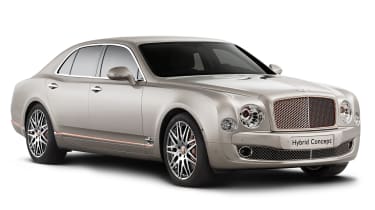 Bentley has revealed images and details of its new Hybrid Concept, which is due to be unveiled at the Beijing motor show next week. The big announcement alongside the introduction of the Mulsanne-based concept is that the petrol-electric drivetrain will be available for up to most of its model range.

The hybrid system is a big part of the company’s future plans, and Bentley Chairman Dr Wolfgang Schreiber has confirmed that 90 per cent of the model range will be available with a hybrid option by 2020. Although the concept looks production ready, Bentley says that the plug-in hybrid drivetrain is still in development, and won’t be on sale until 2017, coinciding with the launch of the new SUV.

Bentley reckons that its plug-in system can deliver a 25 percent increase in power – which would mean around 625bhp – along with a 70 percent decrease in carbon emissions. The concept also has the ability to run in zero-emission electric mode for up to 31 miles.