Bentley has revealed the new Mulsanne Speed model, which brings a number of updates and a high-performance edge to the luxury saloon 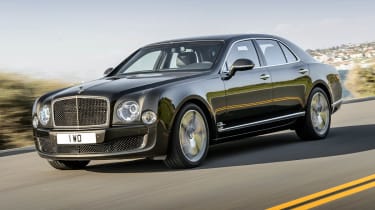 Bentley is to reveal the new Mulsanne Speed to the public at the Paris Motor Show next month. As the sporting version of the carmaker’s flagship model, the Mulsanne Speed’s 6.75-litre twin-turbocharged V8 has been substantially updated to bring improved power and greater efficiency.

To mark the performance Mulsanne out from the standard version, the Speed’s exterior has received some discreet, sporty touches. A dark tint has been applied to the grilles and wing vents, whilst the headlights and taillights have also received a darker finish. Inside, the ultra-luxury interior has undergone similar treatment, with carbonfibre trim, alloy pedals and a sports gear lever joining the usual raft of soft leather and expensive veneers.

The key area to receive treatment for the Speed however is the powertrain. With 530bhp and a hefty 811lb ft of torque available, the sporting luxury four-door can accelerate from 0-60 in 4.8sec and onto a top speed of 190mph - 0.3sec and 4mph faster than the normal car.

Efficiency has also been improved by some 13 per cent, thanks to both internal upgrades and improvements to the V8’s cylinder deactivation technology. Bentley promises shifts between the engine’s economy four-cylinder mode and full power eight-cylinder running will be seamless, enabling the heavyweight saloon to achieve a combined 19.3mpg and produce 342g/km of CO2.

Like the normal car, the Mulsanne Speed sits on adjustable air suspension with a double wishbone front and multilink rear setup. Thanks to the use of continuous damping, auto-ride height controls and four available suspension settings, Bentley is confident in saying that the Speed will be a composed and sporty drive whilst still providing passengers with an ultra-comfortable ride.

That may sound surprising given that the Speed tips the scales at a mammoth 2685kg, but looking back to our tests in the less potent standard car, we can confirm Bentley knows a thing or two in masking hefty kerb weights with some very clever suspension technology.

The new Mulsanne Speed is in no way a lightweight sprinter, but it promises to be one of the best ways to effortlessly cover distances at unbelievable pace, all in surroundings of ultra-luxury. As a result, prices are expected to start at no less than £250,000, more than £20,000 than the less focused normal Mulsanne. The covers will be pulled off in Paris on 2 October, with first deliveries expected to follow in 2015.