Bentley Mulsanne review - the ultimate in luxury? - Engine and transmission 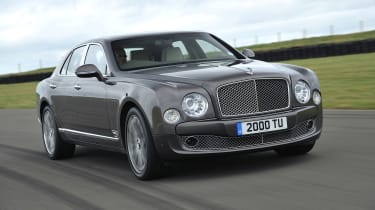 The 6.75-litre twin-turbo V8 in the Mulsanne is a motor that, in one guise or another, has been in production since 1959. Here, in EU6 compliant form, this truly galactic motor produces 505bhp and, in the case of the range-topping Speed, 530bhp.

It is however the torque figure that is astonishing; 752lb ft in the standard Mulsanne and 811lb ft in the Speed. The latter is the most on offer in any production road car today.

This isn’t an M3-style high revving V8 either, the Bentley motor is designed to deliver its power as smoothly and as quickly as possible. As such, peak torque arrives at 1750rpm but the engine redlines at just 4500rpm.

This isn’t an issue though, as the 8-speed auto box delivers almost entirely imperceptible shifts when cruising. In the case of the Speed, a new S-mode will see the gearbox hold the revs above 2000rpm in order to deliver the maximum possible performance.

A Bentley insider did tell us that a three-speed auto gearbox would be sufficient given the torque on offer, but that the 8-speed helps contribute to better efficiency. Either way, the gearbox is as smooth as you’d ever need in an ultra-luxury saloon such as this.

The powertrain in the Mulsanne truly is a wonderful thing. The most linear of motors, with monstrous performance on offer when you need it, it’s truly fitting of the car’s price tag. It’ll also turn 22mpg on a motorway run, which isn’t particularly bad when you consider the sheer scale of the car.