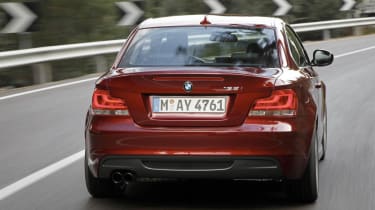 BMW has unveiled a host of upgrades to its range, ready for the 2011 Detroit motor show in January. The BMW 1-series Coupe and Convertible get styling tweaks, though you’d better grab your best anorak if you want to spot them. The front and rear light units get mild tweaks (gaining LEDs), while the front end benefits from a more aerodynamically minded bumper and splitter set up. It’s designed to reduce drag and hence improve CO2, though no figures have yet been revealed. The 1-series hatchback goes without this slight facelift, as a completely new model is on its way. The BMW 1-series M Coupe (review here) will also be on show at Detroit. The all-new BMW X3 has also been sharpened up, with an M Sport package that adds aggression to the aesthetics, with 20in alloy wheels and carbon black paint among the options. It also sees revisions to the suspension, though no firm details of this have yet been revealed. No prices have been confirmed either, though sales begin in spring, when the X3 will also gain a new diesel engine. The xDrive30d boasts a 3-litre straight-six with 241bhp and 398lb ft, while a more powerful version – the 295bhp/442lb ft xDrive35d – follows in summer. Expect prices to start at around £35,000 for the 30d. The hat-trick of new BMWs is completed by the second-generation 6-series. While it was revealed in time with November’s 2010 LA Auto Show, BMW has actually waited until January’s 2011 Detroit event to show the car in the metal. It’s been revealed in Convertible guise first, with sales in spring, too.  Launch versions for the drop-top are the 640i, with a 316bhp 3.0-litre straight-six petrol engine (0-62mph in 5.7sec, 36mpg, 185g/km) and the 650i which boasts a 401bhp 4.4-litre V8 petrol (5.0sec, 26mpg, 249g/km). a 40mpg-plus diesel and twin-turbo V8 engined M6 are expected some time after launch, with the former predicted to be the range best seller. The coupe’s expected in autumn 2011. Read our BMW 1-series M Coupe drive here Read our review of the all-new BMW X3 here Gallery of the all-new BMW 6-series coupe concept