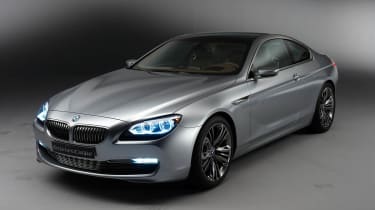 These are the first pictures of BMW’s long-awaited replacement for the 6-series coupe. Featuring less controversial styling than the love-or-hate design it replaces, the ‘Concept 6-series Coupe’ looks very much the F10 5-series in coupe form, albeit with styling cues from the Z4 roadster; a move that will surely allow the new 2+2 to appeal to a wider audience. It will debut at the 2010 Paris motor show.

BMW states that elements of the design are derived from ‘wave motion on the surface of the sea’, characterised by heavily sculpted panels behind the front wheels and a prominent kidney grille up front. The front wings feature M-style wing vents and there is a hint of the previous 6-series in the distinctive bootlid. The concept’s focus is very much on providing a premium, luxurious feel to the new car, with features such as full LED headlights for the first time, imposing L-shaped taillights (also LED) and a full-length glass roof to allow plenty of light into the opulent cabin. Inside, a cacophony of different materials and textures are on show, from piano-black panels to two-tone leather and generous wood in-fill panels, many of which are framed by elegant silver trim.

Atop the dash sits a huge 10.2-inch widescreen display, used for the first time in conjunction with the latest generation iDrive system. The technology doesn’t stop there either, with a head-up display, 16-speaker Bang & Olufsen stereo system, and a ‘black panel’ instrument display generating the dash information and dials electronically. Although no details have been released as yet as to the engine choices, expect follow-ups to both the petrol-engined range and the popular 635d oil-burner, as well as an all-new M6. Click here for all our 2010 Paris motor show news BMW M6 v Audi R8 v Aston Vantage v Porsche 911 We review the diesel BMW 635d