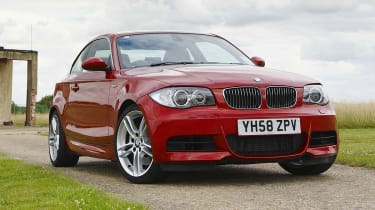 It was off to BMW GB’s workshops in Bracknell this month for the second stage of the 135i upgrade – the BMW Performance suspension kit. In terms of effect on lap time, this ought to be the most effective of the modifications we have planned for the car. Compared with the M Sport suspension originally fitted, the BMW Performance set-up drops the ride height by another 10mm and raises the spring rate by 34 per cent. It is, according to the brochure, ‘optimised for race tracks and slalom courses’.

First, though, there was a small disappointment: Nik Jones, BMW’s aftersales development manager, tells me that despite what the brochure says, the exquisite carbonfibre and aluminium strut-brace won’t fit the 135i because the airbox gets in the way. Still, on the pristine workshop floor there was a substantial cardboard package containing four new dampers, a new front anti-roll bar and various bump- stops and rubber mountings, while on the bench sat a quartet of new springs in the unusual flat mustard yellow that is the BMW Performance colour. The springs are sent separately because they are matched to the specification (i.e. the weight) of the car to be upgraded. The kit itself is a reasonable-sounding £810, but fitting takes around eight hours, including a full geometry realignment. It’s not a DIY job, either, as special tools are required, but it could be carried out by a competent specialist. Our local BMW dealer, Wollaston in Northampton, quoted us £1775.

After the eight hours, senior technician Rob Ward was satisfied that our 135i was ready. I have to say that although it has been lowered by just 10mm, our 135i has gained useful visual attitude. On the move the kit’s presence is instantly noticeable too, initially in the slight uplift in road noise and the sharper reaction to bumps, particularly transverse ridges.

On a favourite back road, the changes are fascinating. The extra firmness you’d expect given the spring rates does give the ride a sharper edge, but it also makes wheel travel more positive, so the fuzzy, two-bites-at-each-bump feel has gone and the 135i feels more direct. Better still, it feels more positive on turn-in, and pouring on the power it stays firmly on the steered course. This bodes well for a reduction in lap time. We’ll get it back on the West Circuit before next month and find out exactly what difference the kit has made to the standard car’s 1:28.7. Stay tuned.