The Christmas break meant a jaunt to Wales to see the folks, and the chance to really get to know the 130. 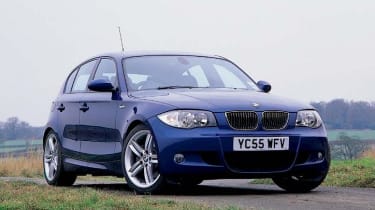 The first job was to get the two of us - and all our stuff - over there, and it didn't go well. The rear-drive layout means a shallow boot, and we were soon running out of space on the cramped rear seats too. Not a great start. However, once off and running, BMW's rear-drive obsession made perfect sense. Squeezing on the power, making the rear squat and step out slightly, the roundabouts of Northampton had never been more appealing. Even the monotony of the M1 was no match for YC55 - when the noise of the straight-six gets boring there's an MP3 CD player and an iPod input, so I'll probably never hear the same track twice in our year together. Staying in the Black Mountains, the call of the glorious roads that run through the area proved too hard to resist. With the traditional boring family Christmas around the Scrabble board on the cards, a quickly engineered story about recce-ing for an upcoming photo-shoot saw me excused and out the door. The smooth, damp tarmac found the 130 a little short of grip, but with the first level of the stability control dialled out it's an incredibly fluid driving experience, the traction control loosening its rein on the rear end just enough to make it fun, but still stopping you throwing it at the scenery when you run out of talent. The tip-toe balance is made all the more enjoyable by the near-perfect primary controls. It's the one thing I did expect from the little M Sport, but the weight and feel of steering, gearchange and brakes still impresses me on every drive. Everything about the interior is just about spot on. The quality of the materials used and the subtle, chic design makes the cabin a great place to be. Outside, however, things are a little more questionable. The reactions you get to the unconventional looks couldn't be more polar - it seems you either love 'em or hate 'em. Thankfully the 130's sharply cut suit works for me, and with the added M Sport body addenda and big wheels it looks every inch the baby M car. The final job of cruising home was all YC55 had left to do, but there things started to go wrong. Unfortunately we were travelling back a few days after the 130 had appeared on Top Gear, and much as we hate to admit it, that show does get people's attention. Where before I could cruise around below the radar of all but the most hardcore petrolheads, suddenly everyone was looking our way, and most of them wanted a race. Fortunately the iPod threw out some Zero 7 to diffuse the situation, and we made our way home at a steady pace. It seems this car has an answer for everything.

Petrol, diesel and plug-in hot hatches will once again join the Golf family, and could be better than ever
Visit/hyundai/i30-n-hatchback/201775/hyundai-i30-n-versus-hyundai-i30-tcr