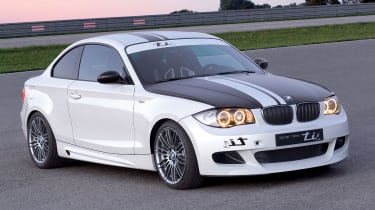 British designer Kevin Rice was on hand at Tokyo to talk us through his latest project at BMW, the stunning 1-series tii concept car.According to Rice, the idea of creating a stripped-out 1-series has been kicking around at BMW for a while, with the super-stiff three-box model (which was planned from the start of 1-series development) being viewed as the ideal starting point.

Sat on the BMW stand at the show, the tii looks amazing, production-ready even. I ask Rice how much work had gone into creating it.

‘It was really easy,’ he replies. ‘The front and rear bumpers are all new, the sills are different, and the bonnet was created in carbonfibre. This was done for two reasons: it saves 15kg compared to a standard item and it also recreates the black-bonnet look common on cars like this in the ’70s – cars like the BMW 2002 tii, in fact.’

More work has been done inside to emphasise that this is a true drivers’ car. The standard seats have been ditched in favour of a pair of winged Recaros, the dash now sports a white-faced rev-counter complete with oil temperature gauge, and Alcantara is everywhere, maximising the driver’s grip and minimising reflections. The footwells, meanwhile, are lined with a new textile that gives a similar appearance to the carbonfibre components.

For the driver’s side of the cabin there’s a subtle blue theme, with blue stitching for the seat and door insert, plus a blue seat-belt. The passenger, on the other hand, gets silver seat-belts and stitching and not much else – even the passenger-side electric window can only be operated from the driving seat.

Unfortunately there’s no word as to what’s under the bonnet, or whether the tii will go into production.

‘We’re not saying anything about engines yet,’ says Rice. ‘This is a BMW AG car, not an M-car, so it will not have the six-cylinder M Power engine. We will see what the reaction is to this concept first, but it could be the six-cylinder twin-turbo engine from the 135i or, alternatively, a turbo four-cylinder, like the ultimate version of the original 2002 had.’

So BMW is going to build it then?