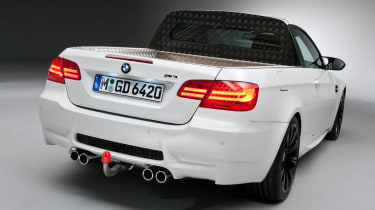 The sight of a pick-up bodied BMW M3 haring around the Nurburgring has had tongues wagging recently. With it wearing the company’s trademark camouflage paint, car folk were wondering exactly what BMW was up to. It turns out - to the disappointment of ‘Ute’ fans - that BMW isn’t creating a flat-bed version for the M3 model line-up. Instead, it’s an elaborate April Fool’s joke, something for which the company is famed. And now there’s a full picture gallery of the car, complete with, even more surreally, a lift-out targa roof. Almost every year, on April 1, BMW takes out an advert in a national broadsheet, in the same format as its regular ads, advertising a completely fabricated product or accessory which is bordering on the verge of credibility. Past highlights include the fly-repellent rubberised windscreen coating, which insects simply bounce off, and the ‘Toot and Calm Horn’, a car horn designed to reduce road rage by emitting a sound that  placates vexed motorists. Every year the ads manage to dupe hundreds of people who aren’t quite paying enough attention. BMW isn’t the only company at it either. Don’t like wearing glasses while driving? Then the Ford Kuga with optional prescription windscreen is for you. SEAT was claiming to offer its Leon hatchback in camouflage paint, which blends the car into its surroundings, before subtly hinting it would beat speed cameras. Even some media outlets were fooled, blindly reproducing the press release without questioning the content. Such is the proliferation of manufacturer April fools gags that sometimes genuine news or products get dismissed as the company in question having a laugh. When Ford announced the limited run RS500 model of its hot Focus, forums were ablaze with people denouncing it as a hoax. Surely Ford’s engineers couldn’t squeeze another 45bhp through the already tortured front tyres of the RS? They did, and the RS500 went on to be one of the very best hot hatchbacks of recent years. But why do manufacturers go to such elaborate lengths to put one over on their customers? Uwe Ellinghaus, BMW UK’s marketing director, explains it like this: ‘It is the aim of the ads to demonstrate that a serious, engineering-driven, German brand can laugh at itself. And maybe the ads also help to overcome the preconception in this country that Germans are humour free.’