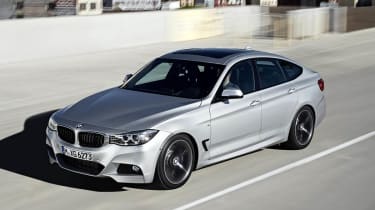 BMW has officially revealed its new 3-series Gran Turismo. The car has long been rumoured (and frequently spied during its development), and now completes the three-model F30 3-series line up before the 4-series coupe and convertible range arrives later in the year. Said to combine the sportiness of the 3-series saloon with the practicality of the Touring estate, it’s actually longer, wider and taller than the latter while offering an extra 70mm of rear legroom – more than you’ll find in a regular 5-series. The driving position is also higher, which will appeal to buyers who might normally consider an SUV. BMW claims it can seat five adults in comfort. It’s fair to say the 3-series Gran Turismo looks a lot sleeker than its 5-series equivalent, and it gets frameless doors and an active rear spoiler that deploys at motorway speeds. There will be five engine choices from launch, ranging from two diesels – the 141bhp 318d and 181bhp 320d – to three petrols – the 181bhp 320i, 242bhp 328i and range-topping 302bhp 335i.  All are four-cylinder, 2-litre turbocharged units except the 3-litre turbo 335i, the only six-cylinder choice for now and undoubtedly the driver’s choice. The 320d is likely to retain its title as range bestseller. A six-speed manual gearbox is standard on all, with an eight-speed automatic optional. All models will be rear-wheel drive, save for an all-wheel drive 320i xDrive which launches later in the year, as does a 325d diesel. An M Sport trim line – with 10mm lower suspension, adaptive dampers and a more muscular appearance – also launches in summer 2013. The BMW 3-series GT weighs in at around £1500 more than an equivalent Touring, with prices ranging from £28,830 for the 320i to £38,470 for the 335i. The car makes its public debut at the 2013 Geneva motor show in March.

Video of the BMW 3-series Gran Turismo below...