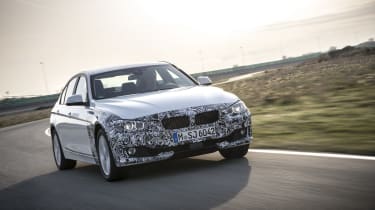 BMW has revealed a prototype version of its upcoming 3-series plug-in hybrid. Combining a four-cylinder turbo petrol engine with an electric motor located on the rear axle, the hybrid system sends 241bhp and 295lb ft to the rear wheels. Though that only matches the power of the non-hybrid 328i, it adds 37lb ft of electric shove.

The 3-Series plug-in hybrid sends drive through BMW's eight-speed automatic gearbox, helping to achieve a claimed 140mpg and a CO2 output of only 50g/km. A ‘regular’ 328i exhales almost three times as much CO2 with a claimed 149g/km and 61mpg. The prototype offers an all-electric top speed of 74mph and has a range of approximately 22 miles. Charging of the vehicle can be achieved through any household socket.

No performance figures are listed for the prototype but expect the electric motor to provide punchier acceleration thanks to the increased torque. With the implementation of the hybrid powertrain additional weight in the form of the motor, lithium-ion battery, its management and cooling system are added. This is located in a ‘crash-safe’ position under the load compartment which only results in ‘a minimal reduction of boot space’ but is likely to affect handling.

Fitted with a Driving Experience Control switch mounted on the centre console, the driver is able to choose settings to suit driving requirements and conditions, similar to current BMW models. Different hybrid modes can be selected including ‘MAX eDrive mode’ which provides all-electric, zero emission propulsion. ‘SAVE Battery’ mode charges the battery if it dips below 50 per cent, allowing drivers to reserve battery until it can be used efficiently.

It’s the new Proactive Driving Assistant that’s perhaps most interesting, though. Using the navigation system, the vehicle manages its powertrain with reference to its battery capacity and monitors the ‘upcoming route, speed restrictions and traffic conditions.’ This energy management system produces an individual strategy to actively manage the vehicle’s electric power until the destination is reached.

BMW has claimed that its hybrid technology - much of which has been borrowed from its i8 and i3 - will be easy to use across all of its brands in the future, as the integration of hybrid systems are considered at ‘all stages in the development of new models’.

There’s even evidence to suggest multiple electric motors could be used in one vehicle, with the ability to double-up electric power with a conventional turbocharged combustion engine. Power figures exceeding 600bhp have been quoted. Did someone say 'hybrid four-pot Rolls Royce?'...