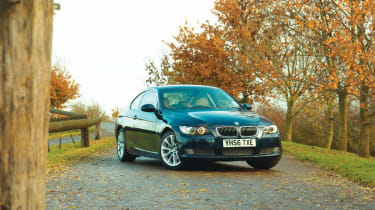 You’ve got to love a car with 428lb ft of torque. Even if you don’t understand exactly what torque is, put your foot down and you understand what it does. And over 400lb ft shoves a medium-weight car like this 3-series coupe up the road like it’s got a 5-litre engine under its bonnet. Not bad for a 3-litre diesel…

Nail the throttle and, virtually from tickover to the red line, this sober-looking BMW 335d delivers proper performance-car grunt. The key to the muscularity of its straight-six diesel is the sequential nature of its twin turbos: a smaller, lighter one spools up quickly to deliver boost at low revs before handing over, seamlessly, to a bigger one that delivers the volumes at higher revs.

For those of us who understand power better than torque, the 335d has a not insubstantial 282bhp – just 20bhp less than the 3-litre twin-turbo petrol engine found in the 335i Coupe that impressed us in last issue’s eCoty contest.

There’s a bit of clattery commotion when starting from cold, but being an in-line six the note filtering through is somewhat classier and more appealing than that of your average diesel. Once it’s warmed through and set to a motorway cruise, most people wouldn’t guess it wasn’t burning petrol. Maybe that’s why the fuel gauge is marked ‘diesel’.

With over a third more torque than the petrol (which boasts just under 300lb ft), you’re grateful for the back-up of DSC in the wet. In the dry the 335d has little trouble using all 428lb ft – delivered from just 1750rpm – to punch forward in dramatic style. And it just keeps on charging forward.

The shift quality of the standard-issue six-speed auto is superb, even at full throttle, and, even in ‘Drive’, manual selection is possible just by flicking a paddle. The paddles aren’t the best, though. Hands on the wheel, your fingertips are perfectly placed, but the logic is different to the norm: both left and right paddles give upshifts at your fingertips, for downshifts you have to stretch a thumb to the paddle extensions that peep over the top of the steering wheel boss. It’s awkward and out of step with most other systems.

As with the 335i, the ride is a bit jiggly at town speeds, but over a flowing road the 335d rides smoothly, feeling poised and precise. Here the steering weight is well-judged, which is in contrast to town speeds, where it is artificially heavy.

Overall the 335i feels a little sweeter dynamically, but the 335d is a fine and very fast car. The catch is the price: the 335d costs £2055 more than the manual 335i. If you can live without an auto ’box, which is a £1590 option on the petrol car, BMW’s combined-cycle consumption figures (38mpg diesel, 30mpg petrol) suggest you would have to cover an awful lot of miles in the diesel 335 before you got a return on the extra investment.

Torque isn’t cheap, but it is hugely gratifying. The manual-shift 335i doesn’t seem lacking in this respect, though, and that would be our choice.