2020 4-series Convertible to join the Coupe and forthcoming Gran Coupe. With that grille. 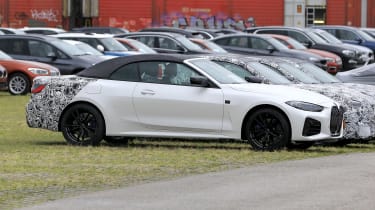 The new BMW 4-series Convertible has been spotted before its reveal later this year, when it will join the new Coupe and forthcoming Gran Coupe. While the package hasn’t generally changed mechanically, the Convertible will differ from its predecessor by returning to the use of a fabric folding roof after two generations of three-piece folding hard-top.

The 3-series Convertible first picked up a three-piece folding hard-top back in 2007 in its E93 generation. Following the hard-top convertible trend that was raging then, the BMW’s impressive space efficiency and increased visibility seemed a worthy compromise for the added weight and expense associated with it. The following 4-series Convertible kept a similar set-up, which this car will directly replace. 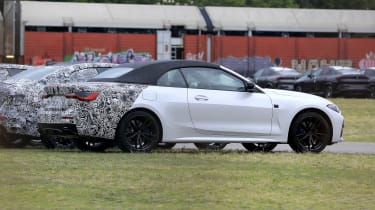 Times have changed, though, and the folding hard-top fad is well behind us, so BMW has decided to join its core rivals from Audi and Mercedes in offering a fabric top, just like the larger 8-series Convertible that is also moments away from release.

Like the Coupe, the Convertible will feature the same controversial design language dominated by the large grille that extends down the face of the front bumper and behind the number plate. The compact fabric roof does completely change the Convertible’s silhouette though, creating a more defined three-box shape compared to the Coupe’s shallow fastback-style roofline. 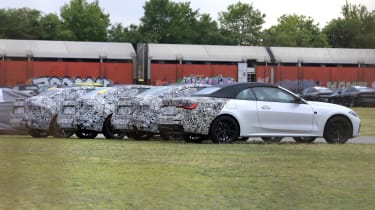 The new 4-series Convertible will be available with the same selection of petrol and eventually plug-in and diesel powertrain options. The range is initially expected to mirror the current Coupe line-up though, which consists of turbocharged four- and six-cylinder powertrains topped by the 376bhp M440i.

The 4-series Convertible was initially expected to be revealed at the Paris motor show in September this year, but with the show’s cancellation due to Covid-19 we expect it to debut online around the same time in a similar fashion to the Coupe.