Drop-top version of 4-series gains another dimension – at a dynamic price. Review, specs and pictures here 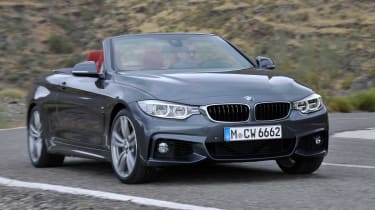 The BMW 4-series Cabriolet is a drop-top version of the latest 4-series coupe. Driven here in top 302bhp 435i form, the 4-series cabriolet effectively replaces the old 3-series Cabriolet, with the extra digit now separating the more upmarket coupe and convertible models from the more run-of-the-mill saloon and touring variants.

Top up or down, the 4-series Convertible is a handsome car and the fully automated metal folding roof feels like a very practical option for the UK climate. If you’re caught in a shower, the switch from roof down to roof up takes 19 seconds, which is OK, but it’s a manoeuvre that can only be executed at speeds up to 8mph – a limit that feels rather too easy to exceed.

Exposure to the elements can add quite a bit to the thrill of driving. Sadly, however, it can also take away. For example, this new 435i Convertible is a whopping 230kg heavier than its coupe sibling, tipping the scales at a hefty 1740kg.

As a result of that extra heft, the performance of the lovely 302bhp turbocharged straight-six under the bonnet feels slightly dulled, with acceleration merely brisk rather than punchy. And while BMW claims that the torsional rigidity of this new convertible body is up 40 per cent on the old 3-series Convertible’s, with the roof down there is still a very noticeable shimmy that resonates through the car on bumpy roads.

To be fair, the 435i Convertible feels solid and secure when loaded up through the corners, and underneath there’s a lovely balanced chassis that feels fluid and easy to adjust, too. It also feels fine over larger bumps (although you can sense that extra weight), so it’s just high-frequency imperfections that seem to set off the disconcerting gentle shudder.

The eight-speed auto is as good as ever and I’ve no doubt that the standard manual gearbox would be a delight to use as well. Ultimately, however, you simply can’t ignore the weight and rigidity issues that come with lopping the roof off.

The 435i Convertible is certainly capable of instilling a sense of well being with the roof down on a sunny day, but the rest of the time, if driving dynamics are what really make you happy, you’ll take the coupe in every instance. The 4-series currently has one major rival in the shape of the Audi S5 Cabriolet. Dynamically it might not be a match, but the it does have a lot of other good things to offer.

Anything else you should know?

The 435i bucks the notion of BMWs having standard specifications meaner than a Dickensian aunt: amongst other things you get as standard are heated front seats, parking sensors, a 6.5in colour screen, xenon headlights, DAB radio and metallic paint.