Subtle styling tweaks, new LEDs and interior improvements are among the changes to BMW's coupe and convertible range 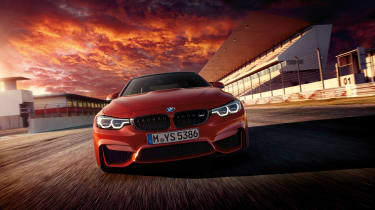 BMW's 4-series range of coupe and convertible models have been updated for 2017, with detail styling tweaks and new equipment - plus a similarly revised range-topper in the form of the 2017 BMW M4.

It'll take connoisseurs of the brand to spot the changes without parking old and new in adjacent spaces, but the easiest alterations to see are those that help you see others, with LED headlights now standard across the range.

Those headlights adopt a distinctive visual signature to the daytime running lights, with a more hexagonal look than before. While these and LED headlights are standard, 4-series buyers will also be able to specify adaptive LED headlights across the range, which boast their own appearance and bring illumination benefits at night.

The headlight redesign is complemented by similar changes to the rear lamps (also fully LED) while a subtle restyling of the front end, with a wide central air intake (bordered in gloss black in some models) further alters the car's look. At the rear the light clusters themselves are wider to lend the appearance of greater width to the whole car.

That's about it for exterior alterations, but a smattering of trim improvements strive to improve the cabin too. Some interior trim (such as air outlet surrounds and belt guides in the convertible) are electro-plated, while chrome elements surround the air conditioning and audio controls. 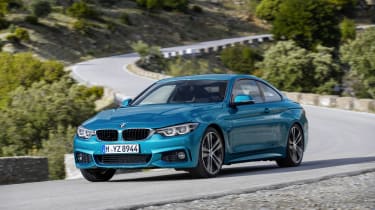 Three new interior colour lines are also available: Midnight Blue Dakota leather, Cognac Dakota leather and Ivory White Dakota leather. Outside there's a new choice of wheels (in both 18 and 19-inch designs) and some new paint finishes - Snapper Rocks Blue is the turquoise shade in the images, and you can probably guess which car is Sunset Orange.

Full UK pricing and specification details will follow in due course, but engine options remain as they are - so the range will begin with 420i models and end with 435d and 440i options (the diesels being xDrive only), with Coupe, Convertible and four-door Gran Coupe body styles available.

All get revised suspension settings - stiffer, BMW says, with new damper settings and tweaks to the electric power steering, for less roll, greater stability and more precision - whether standard, M Sport or adaptive suspension is specified.

The M4's engine also remains unchanged, the 2979cc TwinPower turbocharged inline-six developing the same 425bhp (and hitting 62mph in the same 4.3sec with the manual gearbox). The Competition Pack remains present and correct too, but the M4 gets similar exterior tweaks to the regular models, and the potentially dubious inclusion of illuminated M logos in the front seats.

A Carbon package is available for the M3 and M4 for £3000 (and £2500 for the M4 Convertible) which dresses up the exterior with - you guessed it - carbonfibre accents, while £850 does the same to the cabin.

The new 4-series models are available to order from March 2017 - so expect to see them in the metal at the Geneva motor show in early March.