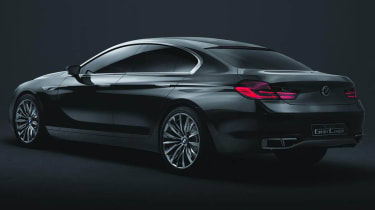 Having created a brand new niche with the 5-Series GT, BMW can’t be accused of resting on its laurels - the Bavarians have just unveiled the Concept Gran Coupe, another niche model and one of the biggest surprises of the Beijing Auto Show. According to BMW, the Gran Coupe blends the abilities of a GT and a sports car, with a roofline 100mm lower than the current 7-Series. The five-metre, four-door coupe is said to be heading for production as a new 8-series - likely in response to the Audi A7 and Mercedes-Benz CLS, or as a replacement for the canned CS project. The Gran Coupe is also a good indicator of where BMW’s design language is headed, taking the handsome, if bland, appearance of the new 5- and 7-Series and distilling it all into coupe form. It’s a smart thing. There’s no confirmation yet on whether the Gran Coupe will go into production, but with a concept that looks so complete, we’d be surprised if it didn’t - and with the A7 and CLS likely to go on sale in the next two years, we’d expect to see a production-ready version at a motor show soon, with sales likely to begin in 2012.