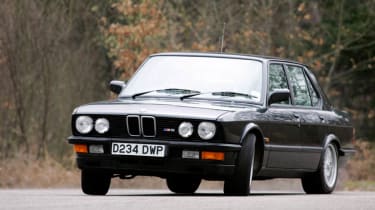 Maybe it’s apt that the BMW M5 slipped into the world through a side door. Visitors to the 1984 Amsterdam motor show who failed to notice its debut were only experiencing what scores of drivers would subsequently find out on the road. The first European production saloon with supercar-rivalling performance dressed down for the job.

True, BMW had dropped enough hints that something special was coalescing in the wings. When the Motorsport division’s first road car – the brilliant, Giugiaro-styled, mid-engined M1 – ended production in 1980, there was never much doubt its extraordinary 277bhp straight-six would live on. The most obvious recipient was the 6-series coupe. BMW Motorsport’s CEO Jochen Neerspasch reckoned the combination would give Porsche’s 911 Carrera a hard time. And with a further developed version of the M1 engine delivering 286bhp, the 1983 M635 CSi did just that, easily eclipsing the 231bhp 911’s straight-line pace.

Meanwhile, the E28 5-series had a brush with the ‘M’ badge as the M535i, basically a 535i with fancy wheels and modest spoilers. ‘M’ in this case stood for ‘M-Technik’ – engine and power were unaltered – but it did create a hunger for a 5-series that could do real damage…

That the most potent car on BMW’s ’84 Amsterdam show stand was also the stealthiest may have seemed odd at the time. The eagle-eyed cognoscenti knew what the M5 was. They clocked the special lattice-pattern alloy wheels, the front splitter and the discreet ‘M’ badges. But without the usual ballyhoo or much of a discernible marketing campaign, the M5 went largely unnoticed by the masses. And that’s the way BMW wanted it to begin with. It was a low-volume specialist project hand-built at the Motorsport facility, away from the BMW production lines.

But then not recognising the M5 for what it was quickly became part of the mystique. Essentially it was a Q-car, an ordinary-looking executive saloon powered by an extraordinary, race-derived engine. As the first true supersaloon, it sparked a power struggle that has lasted a quarter of a century and seen four generations take the fight to the opposition it created. Next year, the most powerful and advanced M5 yet looks set to push the bar higher still. For now, though, let’s rewind to the M5’s 25th birthday bash late last year. Based at the M division’s long-established Nürburgring test centre a five-minute walk from the Ring pit lane, it provided the perfect opportunity to chart the evolution of a modern motoring icon. Four generations of M5 are lined up in the pale autumnal sun. The Green Hell beckons.

E28 (1984)At first glance, the original M5 looks impossibly sober and restrained. And old. Boxy and tall, its glassy cabin feels voluminous and airy in a way that more modern saloons hardly ever do. But the E28 is also a brilliantly uncluttered and practical piece of design with instrumentation that has yet to be bettered in a Five – two large main dials of startling elegance and clarity – and simple, intuitive switchgear. The high driving position, over-firm, angular seats, large thin-rimmed wheel and mushroom-shaped gearknob smack of another, distant era.

As do the noises from the engine room. Filtering of the twin-cam valvetrain and five-speed transmission is minimal, lending the baritone howl of the 286bhp straight-six a tappety, clicking counterpoint, underscored by the whine of meshing cogs. It’s a harder, more mechanical sound than you get in subsequent M5s. The pin-sharp throttle response – an enduring M5 attribute – seems at odds with the slow (but satisfying) gearchange, but the tall tyres and soft suspension give the chassis a distinctly un-edgy, flowing demeanour. Everything feels cushioned and there’s a constant impression of ‘taking up the slack’, though in a very progressive, measured way that seems to give you more thinking time. By comparison with the E60, it feels almost Gallic in its levels of body-roll and pliancy. But it has a sweet and rewarding chassis that will go sideways in a benign, easily catchable way, even if big armfuls of correction are needed. It’s more satisfying at about 8/10ths, balanced nicely on the throttle in a neutral attitude just within the tyres’ limits. Less strain on the rather fade-prone brakes that way, too.

E34 (1988)The next-generation M5 might well have been a V8. In fact, there were strong voices within the Motorsport division that felt it was the way to go. They were right, of course, but a little premature. The majority wanted to stick with the straight-six, not least Paul Rosche who designed it. Like its predecessor, the E34’s engine and chassis were put together in-house by M, and legend has it that the level of bespoke build was such that each car’s dynamic demeanour had a little characteristic that identified the technician that built it.

Engine capacity and power grew to 3.6 litres and 315bhp (and later to 3.8 and 340bhp) and its suspension was much more radically altered than the E28’s. The E34 was also the first M5 to spawn a Touring estate, though only 891 were built. The E34 looks and feels bigger than the E28, also lower and squatter. Arguably it’s the prettiest of the Fives but every bit as stealthy and unassuming as the E28. Its cabin has more modern proportioning but is similarly clean and uncluttered, retaining those wonderfully big, bold instruments and simple, chunky switchgear. The steering wheel is fractionally more compact but connected to a helm that still feels very low geared by modern standards.

Even with the initial 315bhp engine, the performance feels stronger and sounds better and I’m again struck by that beautifully accurate throttle response. The big, naturally aspirated straight-six isn’t over-endowed with low and mid-range torque and the tall gearing (third is good for the ton) and long throttle travel can initially make the E34 feel slightly torpid – this in stark contrast to the E39’s eager, bounding part-throttle response. Stay with it, though, and the foot-flat top-end rush is properly brutal.

The E34 doesn’t feel quite as threadable as the E28 and its ride, while comfortable, is appreciably firmer. But with the tauter chassis and reduced body roll comes more outright grip and you have to try harder to unstick the rear end. When it lets go it does so more suddenly, but the tail is still exploitably mobile and easy to control. Favourite M5 so far? This one.

E39 (1998) The formula is updated again. Considerable V8 potency nestles beneath the plain but still pretty wrapper – 4.9 litres, 48 valves, 400bhp, 7000rpm red line, 369lb ft of torque at 3800rpm, slick six-speed manual and the early stirrings of the configurable electronics that will inform the communicative abilities of future M5s. The button labelled Sport triggers sharper drive-by-wire throttle response and a little more steering weight. And, as with so much else about this E39, it’s very nicely judged.

The E39 was the best-selling M5 up to this point, with over 20,000 built. It was also the first M5 to be produced on the regular BMW production line. A Touring version was even considered (see left) but never given the green light. A paradigm shift in design towards much rounder forms, the E39 has a much snugger-feeling cabin to go with a lower, more muscular stance and bulging arches amply stuffed with 245/40 18s at the front and 275/35 18s at the rear. This is also the first appearance of the M5’s now signature quad tailpipes, too.

You seem to sit much deeper in the car and the seats are softer, more form-contoured and electrically adjustable. The dials in the instrument display have shrunk by several sizes but are supplemented by a centre console display. Easily the quickest M5 so far (0-60mph in 4.8sec) with a wonderfully smooth and free-revving V8 – if a muted and slightly distant-sounding soundtrack – the E39 is even more memorable for a chassis that combines great comfort with almost absurdly exploitable driftability (once you’ve switched off the traction control), ensuring that driver and passengers are kept equally happy, though not necessarily at the same time.

E60 (2005)And so to the current M5, the E60. Despite having a 5-litre V10 developing 500bhp, an output that would have been considered absurd in a saloon a decade ago, it demands no special skills from its driver. Straight-line performance is phenomenal – the ton is history before the stopwatch has clicked into double digits and a 0-150mph time of 21sec is too hot for all but the swiftest supercars. Throttle response is staggering, especially on the Sport setting, and the engine sounds like its gargling with double cream. Admittedly, the E60’s V10 is more peaky than the E39’s V8 but so ferociously potent at the top end you cease to care after a while.

Then again, it’s easy to see how you could treat the M5 as a luxury saloon, driving long distances on motorways without an irritating barrage of bumps, wind noise or tyre roar. The chassis is a piece of work, too. Shorn of lesser 5-series’ run-flat tyres and active steering, it delivers an object lesson in precision and pliancy. And the 19in wheels, shod with 255/40s front and 285/35s rear, generate grip the E28’s engineers simply wouldn’t have believed. The E60 also possesses by far the best brakes of any M5 and steering that’s usefully meatier than the E39’s. Traction-control-off drifting requires a little more throttle and commitment than in an E39 but is similarly exploitable.

But while the E60 is the fastest and most impressive M5, it isn’t the most likeable. It lacks the easygoing simplicity of the E28 and E34 and the perfectly blended attributes of the one I’d want to drive home from the Ring: the E39.

We expect the next-generation M5 to arrive in early 2011. Gone will be the exotic 5-litre V10 – killed by its thirst, emissions and a recessionary mindset – in favour of the direct injection 4.4-litre twin-turbo V8 already seen in the X6 M.

The good news is 555bhp, the retirement of BMW’s tiresomely thumpy seven-speed SMG robotised manual for a seven-speed dual-clutch gearbox, and more torque than you can shake an iDrive controller at – in the order of 500lb ft at just 1500rpm.

It will be weight-conscious and slippery too, with carbon being used in the bodyshell and active aerodynamics that blank off part of the grille. The M5’s mainstay MacPherson strut front suspension will be replaced with a new double wishbone set-up and teamed with multi-link rear suspension.