With the introduction of the revised 5-series, BMW has revealed a new M5, and has confirmed a new Competition package for the M5 and M6 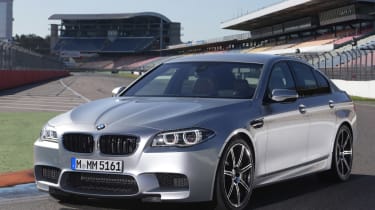 BMW has revealed the updated BMW M5, along side the rest of the recently facelifted 5-series range. Most of the changes are cosmetic, although BMW has also announced the arrival of a new Competition Package for the M5, seeing power increased, along with several suspension tweaks.

Also available on all variants of the M6, which shares the M5’s 4.4-litre twin-turbo V8, the Competition Package sees power output raised by 15bhp to 567bhp. This results in a slightly quicker 0-62mph time, shaving 0.1secs off for each model – down to 4.2secs for the M5.

The suspension settings have also been fine-tuned by BMW, resulting in a 10mm drop in ride-height, as well as the fitment of a stiffer anti-roll bar. The active differential also gets a new control unit, which BMW says results in ‘further improved traction’. The package is said to make the car more track-biased, resulting in faster lap times.

Externally, the standard M5 has received a new set of wheels, with a new ‘double-slat’ design. This double-slat theme also continues, with a similar treatment on the grille, and also on the new sports steering wheel. The mid-life facelift also brings optional adaptive LED headlights, and new rear light clusters.

Fans of the recent special matt paint finishes on the run-out M3 models, will be happy to hear that BMW is now offering these on the M5, including Frozen Blue metallic and Pure Metal Silver.