BMW has boosted economy for the 520d to turn it into the most frugal big exec, with mpg and CO2 to rival a supermini 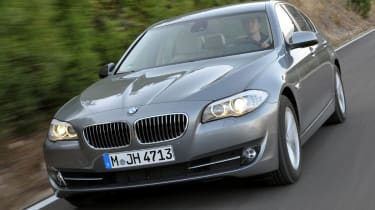 The BMW 520d Efficient Dynamics is the lowest-CO2, and therefore lowest-tax, large saloon on the market – and it has a 184bhp, 280lb ft engine. The magic fiscal figure is 119g/km, the sort of CO2 figure usually scored only by superminis. And this is a BMW 5-series we're talking about.

The 520d is already an impressive turbodiesel, and the ED version uses the same 2.0-litre engine in the same state of tune. The Efficient Dynamics part consists of a stop-start system, a gearshift indicator to suggest the most economical shift speed, energy recovery under braking via the alternator, variable cooling flaps so air doesn't flow through the engine bay unless needed, an aerodynamic wheel design, a longer rear axle ratio and no automatic transmission option. That's significant given the claims sometimes made for an auto's superior economy – claims which usually result from a very long top gear and the fact that an auto isn't forced by the official tests to be in a particular gear at a particular point in the test cycle.

It's a 5-series, so it's large but nicely balanced in usual 5-series fashion. Standard on all Fives now is a 'Driving Experience Control' which lets you set your car to Sport Plus, Sport, Comfort or, in four- or six-cylinder cars, Eco Pro. Steering weight, accelerator response and ESP settings are altered, and in the Eco-Pro mode accessories such as air-con are run as economically as possible. This mode also brings on a display which shows how much fuel you're saving versus the more profligate modes, records your mpg history and gives a few vague tips on economy driving which will probably raise your blood pressure.

So far, then, very worthy but not very evo. And with M Sport options pointedly unavailable for the 520d ED, this will never be a rousing drive – although the optional variable dampers will sharpen it up when the DEC is set accordingly. Which means that when you're enjoying it the most, you will not be doing anything close to 119g/km.

However, you won't mind making use of the engine's strong low-speed pull (to considerable economy benefit) because it has a 'centrifugal pendulum absorber'. This clever device, already seen in the regular 520d and other BMWs with this engine, goes a stage further than a dual-mass flywheel by effectively altering the outer flywheel's rotational mass as speed changes. At low engine speeds it filters out, with uncanny effectiveness, the dieselly vibrations that can discourage drivers from making the most of a turbodiesel's low-end thrust, while at higher engine speeds it lets the revs drop more quickly for a quicker, cleaner gearchange.

And, of course, being a manual the ED puts you in touch with the driving process in a way we'd slightly forgotten in a 5-series, most of its brethren being automatics. Driving for maximum economy becomes a good game in itself, and the best bit as that you can do this while still making surprisingly speedy progress. This car is faster than it feels.

It was interesting to drive this car, as we did, immediately after the new M5. Compared with the blustering V8, even on its gentlest settings, the 520d ED felt like a car designed to waft you away to the nearest cloud. Ultimate driving machine it is not.

For economy, nothing in the class comes close; next-most frugal is the Audi A6 2.0 TDI with 129g/km, the same score as a non-ED 520d. There's little doubt that the 520d Efficient Dynamics will be the biggest-selling 5-series of all, especially as its £30,435 selling price is just a bearable grand or so above the regular 520d SE.

It's on sale now, and there is no holier-than-thou ED badging. As a way of extracting the maximum tax advantage while driving a rapid and capable BMW, this car is right on the nail. Just don't expect many thrills.