BMW 5-series review - is this the best saloon in the world? - Design

Whereas the 5-series moves the executive class in most measurable ways, its Achilles heel is arguably the exterior design. The overall shape is recognisable from the previous generation, sharing its traditional cab-back silhouette with most other BMW saloons. This time though, aerodynamics have played a big role in the details, which has both good and bad knock-on effects.

The large, upright kidney grilles look good in isolation, however the headlights that flank them are proportionately oversized in comparison. This is then compounded by the fact that the grille cuts into the bonnet, again, in isolation that’s fine but it leaves the whole front end without a brow like on the smaller 3-series. The oversized and complex lower apertures don’t help, leaving the front of the car looking a little fussy but more importantly, devoid of any inherent aggression. 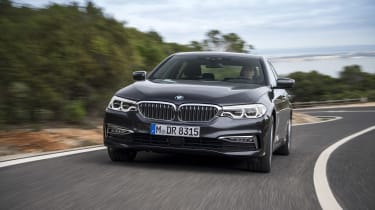 The rear has been heavily informed by the wind tunnel, as the boxier shape aids airflow as it whips past the car. The heavily wrapped rear lights have the same issue as the headlights, looking too big and out of proportion with the rest of the car. The estate manages to avoid this problem, looking a little more rounded and less awkward from most angles.

These design choices are a real shame though, as the main of the body is well proportioned and nicely detailed. Like the larger 7-series, the 5 has a body crease accentuating the Hofmeister kink before returning down the flank towards the front wheel arch. In a clever use of surfacing, that accent line is then joined onto the more traditional character line, eventually flicking round and then terminating at the taillight.

M Sport models feature the usual mix of differently styled front and rear fascias, while reducing the amount of chrome and upping the wheel size. Aside from the Bangle era E60, the 5-series has always been a pillar of design conservatism and the new car is no different. It will definitely appeal to its target audience.