BMW's new-age M6 launches as a Convertible first. As good as the F10 M5 it's based on? 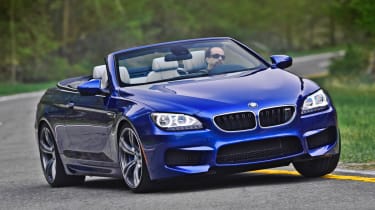 What is it? The all-new BMW M6 Convertible, An F10 BMW M5 with a fancy three-door body and no roof. OK that’s unfair, but the 552bhp blown V8, M DCT twin-clutch gearbox and suspension are all carried over. BMW has broken with tradition for the new M6, launching the Convertible before the Coupe in an attempt to whip up some summertime trade. Technical highlights? It’s hard to look past the engine - it doesn’t so much dominate the experience as swallow it whole. The 4.4-litre twin-turbo lump delivers its maximum 500lb ft of torque from just 1500rpm – the polar opposite to the screaming race-derived V10 from its predecessor – and it produces 52bhp more while consuming 30 per cent less fuel.  The rear-axle sub-frame is bolted directly to the body, a la M3 GTS, and it sticks with hydraulic steering instead of an electromechanical system. Head of the M brand in the US says it will be two or three years yet before it succumbs to that.  There are three modes apiece for the gearbox, steering, throttle response, suspension and traction control – as well as the choice of manual or auto. That’s 486 possible combinations, two of which can be stored on the buttons marked M1 and M2 on the wheel. What's it like to drive?  Like a two-ton convertible with a firework up its diffuser. In a straight line it piles on the speed in such a ferocious and sustained manner that you can rarely deploy its full potential on the road. On full-bore upshifts the M DCT gives you another kick in the back for good measure. Drop the roof, or keep it up and retract the rear windscreen, and it’s certainly louder than the M5, but given the performance the bassy woofle from the exhausts is a tad disappointing. Show the M6 a series of quick corners and it dishes out a lesson in body control. Front-end grip is monumental (partly thanks to an extra 30mm of track), while the M Diff at the rear helps you to deploy the power ridiculously early – for a 552bhp rear-wheel car it’s surprisingly friendly and straightforward. The steering offers a good level of feedback and the suspension is supple in its softest mode, and erases body roll in its firmest. Hit a bump mid-corner and the chassis shakes it off nonchalantly, such is its stiffness. So it’s impressive then, but somehow lacks sparkle. It batters a road into submission rather than working with it – for £100,000 you’d hope for a little more subtlety.  How does it compare?  In pure engineering terms the M6 flirts with perfection, but the result never matches the sum of its parts. It’s competing in a gridlocked section of the market and the truth is it’s not as fun as the ballistic Jaguar XKR-S, doesn’t feel as special as the Maserati GranCabrio and then it’s got our favourite soft-top, the superb Audi R8 Spyder, to worry about.   And Anything else I should know? A manual version of the M5 goes on sale in North America in a few months time, while a manual M6 is apparently under consideration. We’d say it’s a no-brainer; it would add some much needed character to the M6 package. It’s unlikely to make it to the UK, though.