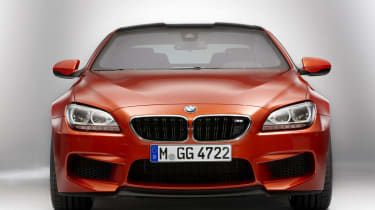 BMW has pulled the wraps off its all-new M6. It’s been unveiled as both a convertible and coupe, and thanks to the latest M5’s monster twin-turbo V8 engine, both are predictably rapid. The 4.4-litre unit boasts 552bhp and 501lb ft, up 52bhp and an impressive 117lb ft over the outgoing, 5-litre V10 powered M6. That’s enough to compensate for the new M6’s lardier 1.8-ton kerb weight; the coupe can hit 62mph in 4.2sec, the convertible one tenth slower, making the M6 as quick as the significantly lighter Audi R8 and Porsche 997 GT3. The top speed is, as usual for an M car, electronically limited to 155mph as standard. An option ‘M Driver’s Package’ yields a supercar-bating 189mph maximum, however. Drive goes to the rear wheels via a seven-speed twin-clutch gearbox and the active differential seen on the F10 M5. The suspension is overhauled compared to a standard 6-series, too, with wider track widths and new dampers, springs and bushing to make sure the M6 is suitably more focused. A plethora of electronic adjustment is standard-fit, along with a more lenient M Dynamic Mode for the stability control. There’s a lightweight braking system fitted, while carbon ceramic stoppers are on the options list.

There’s even claims of decent economy, with the coupe capable of returning 28.5mpg (putting it close to hot hatchback territory) and emitting 232g/km of CO2. That still puts it in one of the highest tax bands, but it’s well over 100g/km healthier than the V10 M6 it replaces. Looks wise, it’s a fairly subtle makeover compared to an M Sport-specced 6 Coupe, but M enthusiasts should still spot the new car with ease; telltales are the carbon roof, pumped-up alloys and quad exhaust pipes at the rear. The interior boasts some smart detailing, too, with the stubbier M Division gear selector in the middle and a new steering wheel, equipped with gearshift paddles. The 2012 BMW M6 goes on sale in the UK in September, though you’d better get saving – the coupe starts at £93,795, the convertible £98,995. That’s up over £6000 compared to its predecessor, and over £20,000 more than its similarly quick but more practical M5 sibling.