evo's Harry Metcalfe gets his first ride in the BMW i8, a petrol-electric Porsche 911 rival. Video and preview here 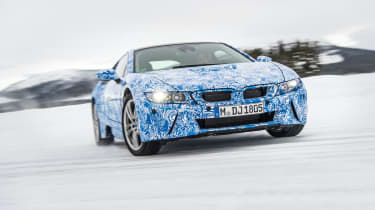 What is it? The radical BMW i8 2+2 Coupe is not due to go on sale until early 2014 but when it does arrive, it looks set to challenge what we currently define as a sports car. With a claimed 0-62mph time of less than 4.6sec, a top speed limited to 155mph and a target fuel consumption average of 104mpg (and CO2 emissions rated at 66g/km), this is a very different sort of performance car from BMW. To give us some idea of the dazzling new technology on the i8, BMW invited evo to its winter test facility near Arjeplog in northern Sweden, to experience some early prototypes of this revolutionary new ‘performance-hybrid’ Coupe from the passenger seat.  The BMW i8’s tech specs Positioned between the rear wheels is a new, all-aluminium, 1.5-litre three-cylinder turbocharged petrol engine (due to appear in the new Mini later this year) that delivers 220bhp and 221lb ft of torque to the rear wheels via a six-speed automatic gearbox. Up front is a BMW-built electric motor, rated at 128bhp and 184lb ft of torque and powering the front wheels via its own dedicated gearbox. Finally, there’s another 10kw electric motor sandwiched between the rear petrol engine and gearbox, which acts as a starter motor, electricity generator or additional power source, depending on what’s required at the time.   The way the i8 is constructed it pretty radical too, with composite used for the passenger tub, roof and doors, together with aluminium for some other body panels, giving the i8 an impressively low kerb weight of 1480kg, despite carrying over 200kg of electric motors and batteries on board. Given an M3 weighs in at 1580kg, that’s remarkably light given the i8 is over 15ft long, with a usable 2+2 cabin. So what’s the i8 like? From the moment the carbon door swings open and you climb in over the high carbon sill and settle in the carbon-shelled seat, you know you’re entering something pretty special. At the wheel of the car I’m riding in is BMW Group’s head of chassis development, Yos Van As, who begins our drive in ‘Hybrid’ mode (designed to maximise fuel economy), meaning my first experience is the eery silence of the i8 pulling away under electric power.  As we accelerate harder, the three-cylinder engine springs into life behind us and as it does, a distinctive three-cylinder warble fills the cabin and increases in intensity as Van As pushes towards the 6500rpm redline. It’s an appealing soundtrack but nothing like the bark we’re so used to coming from BMW’s multi-cylinder engines. But engineers working on the i8 let slip later they are still working on refining the engine sound and are looking at ways to use the i8’s sound system to enhance the engine sound in the cabin, just as they have on the twin-turbo V8 BMW M5.  Other driving modes include electric-only, where a fully charged i8 can travel up to 35km (21.7 miles) without the petrol engine coming into play, and ‘Sport’ that brings all three power sources into use at the same time, keeping the battery topped up by using any surplus energy to power the generator-come-starter motor mounted alongside the engine. In ‘Sport’, BMW engineers believe the i8 will out-punch its main rival’s in-gear times (Porsche 911 and Maserati GranTurismo), thanks to the total amount of torque available from its three powerplants, their combined outputs rated at 349bhp and 406lb ft.  BMW i8 first ride conclusion The most impressive aspect of the new BMW i8 from the passenger seat is the seamless integration of the three separate power sources. The ride seems a little fidgety to me but the chassis refinement is what the team are now working on and they recognise this is a car that will be put to daily use, so a comfortable ride is one of the top requirements. I was also pleased to see the standard tyre width on the i8 will be 195 front and 215 rear, which is comparable to the Toyota GT86 and a welcome sign that outright grip isn’t the overriding goal of the chassis engineers.  Even at this early stage, it’s obvious this BMW i8 is going to be an impressive machine. Not only does it look fantastic (the production version is set to be revealed in September), it feels special to travel in too. The development team are determined to make this a fun car to drive and if it gets anywhere close to the performance and economy claims BMW are making for it in the real world, then what we are looking at here is a step-change in what a sporting GT Coupe is meant to be.